The Postmodern Condition: A Report on Knowledge (Theory and History of Literature #10) (Paperback) 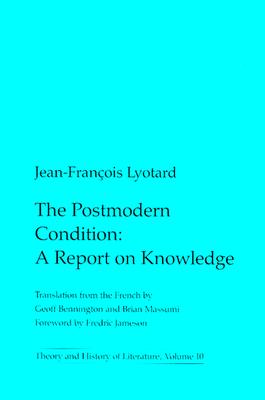 The Postmodern Condition: A Report on Knowledge (Theory and History of Literature #10) (Paperback)


Backordered
Many definitions of postmodernism focus on its nature as the aftermath of the modern industrial age when technology developed dynamically. In The Postmodern Condition Jean-Francois Lyotard extends that analysis to postmodernism by looking at the status of science, technology, and the arts, the significance of technocracy, and the way the flow of information and knowledge are controlled in the Western world. Lyotard emphasized language; the world of postmodern knowledge can be represented as a game of language where speaking is participation in the game whose goal is the creation of new and ever-changing social linkages.

Jean-Francois Lyotard is professor of philosophy at the University of Paris at Vinecennes. He is best known for his studies of aesthetics and of the psycho-political dimensions of discourses. Among his books are Discours, figure and Economie Libidinale.

Fredric Jameson is professor of French Literature and history of consciousness at the University of California, Santa Cruz.

Translators Geoff Bennington and Brain Massuni are, respectively, lecturer in French at the University of Sussex and candidate for a Ph.D. in French at Yale University. Bennington is an editor of The Oxford Literary Review and has contributed essays and reviews to that journal and to Diacritics, Poetique, and French Studies.