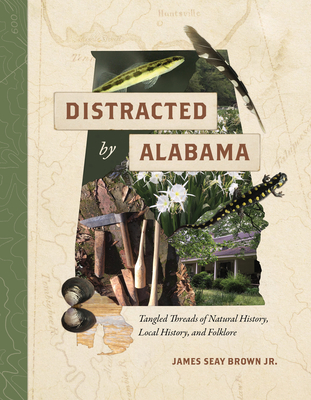 
Not On Our Shelves—Ships in 1-5 Days
Reflections on fifty years of interaction with the people, places, wildlife, and folkways of Alabama

In 1971 James Seay Brown Jr. moved to Birmingham with his young family to start his first full-time teaching job at Samford University specializing in modern European history. Within days he discovered the Cahaba River, and soon was regularly exploring many of Alabama’s rivers and much of its countryside—from the Paint Rock River on the Tennessee line to Wolf Bay on the Intracoastal Waterway. He was enchanted both by the myriad animals and plants he discovered and by the surviving old-time settler and Native American folkways so closely tied to their seasonal migrations and development.

About the same time, Brown became particularly interested in the folkways that arose from European cultural nationalism in the Romantic age. As he delved deeper into folklore studies for their insights into history, local examples presented themselves in abundance—Sacred Harp singers and African American railroad callers, the use of handmade snares and stationary fishtraps to catch river redhorse and freshwater drum during their spawning cycles, white oak basketmaking and herbal medicine traditions, the evolution of the single-pen log cabin into the impressive two-story I-house, and many more.

Together with colleagues in Samford’s biology and geography departments, Brown adapted a “geology to future planning” model for introducing students to land use patterns over time in various parts of the world. Although he took students to 22 countries on five continents, he kept returning to Alabama examples. When he integrated experiential education teaching techniques including crafts apprenticing, cultural journalism, and adventure-based education into his classes, many of them used examples and materials from Alabama.

Interspersed throughout with insights drawn from Brown’s academic career and his work with a variety of Birmingham-area community organizations, Distracted by Alabama traces a very personal, historically informed, and idiosyncratic profile of a region in transition in the mid to late twentieth century, and is a testament to the ideals and value of liberal arts education in a society.

James Seay Brown Jr. is emeritus professor of history at Samford University. He is author of Fairy Tales, Patriotism and the Nation-State: The Rise of the Modern West and the Response of the World and editor of Up before Daylight: Life Histories from the Alabama Writers’ Project, 1938–1939. He has served as president of the Alabama Folklife Association and remains active in academic and community life.

“There is a saying, ‘Before you can think outside the box, you have to know what’s in it.’ Buried in some boxes is the folk culture of a people. That is where Russian-historian-turned-Alabama-naturalist James Seay Brown Jr. begins his journey of discovery: herb doctors, salamanders, African American railroad callers, and Sacred Harp singers, among others. Distracted by Alabama is both a celebration of the state’s bottomless box of folkways and an intellectual feast, equally adaptable to PhDs and good ol’boys and girls.”
—Wayne Flynt, author of Poor but Proud: Alabama’s Poor Whites and coauthor of Alabama: The History of a Deep South State, Bicentennial Edition


“Distracted by Alabama is a delightful sampler of experiences and research by Dr. James S. Brown Jr., a well-known historian from Samford University. A consummate scholar and teacher, Jim Brown reveals the long timeline of his investigations into the rich diversity of Alabama’s history, cultural traditions, and environment. The discipline of folklore has never been in Jim’s official academic job description, and yet his research has been foundational in the study of several important Alabama traditions: most notably, gandy dancer work songs of railroad line crews and a slew of practices associated with natural resources, including white oak basketry, herbalism, shoals fishtraps, and redhorse snaring. In sharing his journey, Jim Brown carries the reader on an immersive, experiential odyssey as he has done for his many fortunate students through the years.”
—Joey Brackner, former director of Alabama Center for Traditional Culture, a division of the Alabama State Council on the Arts


“Jim Brown’s book, Distracted by Alabama: Tangled Threads of Natural History, Local History, and Folklore, is like the Irish ballad that narrates a series of droll accidents that show why Johnny isn’t at work today. Brown, however, lists the wonders of local and natural history in Alabama that for 45 years as a professor at Samford University distracted him from turning his dissertation on Russian history into a textbook. Among the phenomena that diverted his attention were the migration of spotted salamanders, singing from The Sacred Harp, natural fishtraps and river redhorse suckers, railroad work gang callers, herbal healing, and all things Cahaba River. He immersed himself (sometimes literally) in each, then collaborated with various experts, enthusiasts, and organizations to see that they were preserved or at least remembered. Believing that history should be embedded in a broad framework encompassing geography, anthropology, arts, etc., and that the best education was experiential, he created courses which drew his students into the diverse marvels of the state. He writes, ‘Almost all my memorable successes were those that actively engaged students in problem solving and turned me into more of a guide and fellow learner than a self-proclaimed absolute source of all relevant knowledge.’ Anyone familiar with Samford University between 1971 and 2016 knows that Jim Brown was a highly respected and beloved professor. Readers of his memoir now have the opportunity to see the remarkable things he saw and people he met on his purposeful rambles through Alabama.”
—Joyce Cauthen, director emeritus, Alabama Folklife Association