No One to Meet: Imitation and Originality in the Songs of Bob Dylan (Hardcover) 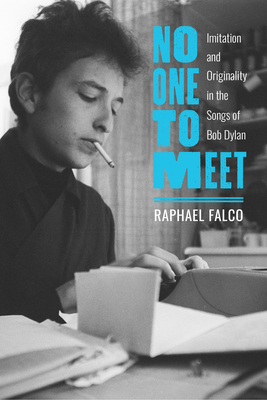 No One to Meet: Imitation and Originality in the Songs of Bob Dylan (Hardcover)

WINNER OF THE ELIZABETH AGEE PRIZE IN AMERICAN LITERATURE

The literary establishment tends to regard Bob Dylan as an intriguing, if baffling, outsider. That changed overnight when Dylan was awarded the 2016 Nobel Prize in Literature, challenging us to think of him as an integral part of our national and international literary heritage. No One to Meet: Imitation and Originality in the Songs of Bob Dylan places Dylan the artist within a long tradition of literary production and offers an innovative way of understanding his unique, and often controversial, methods of composition.

In lucid prose, Raphael Falco demonstrates the similarity between what Renaissance writers called imitatio and the way Dylan borrows, digests, and transforms traditional songs. Although Dylan’s lyrical postures might suggest a post-Romantic, “avant-garde” consciousness, No One to Meet shows that Dylan’s creative process borrows from and creatively expands the methods used by classical and Renaissance authors.

Drawing on numerous examples, including Dylan’s previously unseen manuscript excerpts and archival materials, Raphael Falco illuminates how the ancient process of poetic imitation, handed down from Greco-Roman antiquity, allows us to make sense of Dylan’s musical and lyrical technique. By placing Dylan firmly in the context of an age-old poetic practice, No One to Meet deepens our appreciation of Dylan’s songs and allows us to celebrate him as what he truly is: a great writer.

Raphael Falco is professor of English at the University of Maryland, Baltimore County, and a coeditor of The Dylan Review. He is author of Cultural Genealogy: An Essay on Early Modern Myth, Charisma and Myth and Charismatic Authority in Early Modern English Tragedy.

“No One to Meet is a welcome contribution to literary-critical scholarship’s engagement with the Dylan canon. Raphael Falco’s focus on the artist’s compositional method, viewed as the key to understanding his predecessors’ influences and his own . . . lyrical experimentation, is compelling.”
—Michael J. Gilmour, author of The Gospel According to Bob Dylan: The Old, Old Story for Modern Times

“No One to Meet contains multitudes; it will be a major contribution to Dylan studies and American studies.”
—David Yaffe, author of Bob Dylan: Like a Complete Unknown