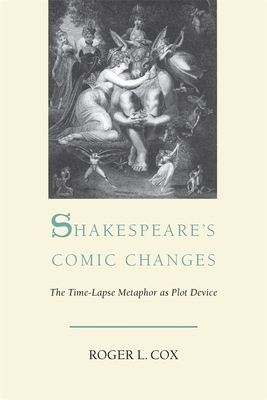 
Not On Our Shelves—Ships in 1-5 Days
Perhaps the central question about Shakespeare's comedies is whether they form a single group we can meaningfully call "Shakespearean comedy." The problem arises in locating a unifying principle that is not so broad as to lack interpretive value. In Shakespeare's Comic Changes, Roger L. Cox argues that the thread connecting almost all of Shakespeare's comedies is a plot in which character change is presented metaphorically instead of realistically. Violating classical dramatic rules about the consistency of character, Shakespeare offers character changes that are improbable and unrealistic. Shakespeare's chief means for representing character change is what Cox calls the "time-lapse metaphor." Two sharply contrasting views of a given character emerge in time-order: first, a fairly realistic view of the character as flawed and in conflict with society; then, an idealized view of the same character "reformed." Cox argues that, by allowing us to see the plays as a cohesive whole, the time-lapse metaphor thus becomes the very basis for the plot.
ROGER L. COX was a professor emeritus of English and comparative literature at the University of Delaware. He is the author of Between Earth and Heaven: Shakespeare, Dostoevsky, and the Meaning of Christian Tragedy.