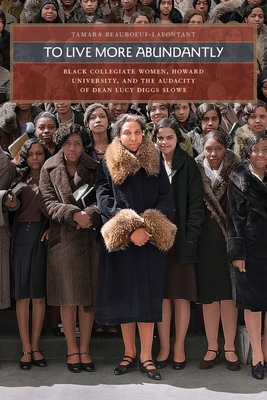 How have Black women fostered belonging in higher education institutions that have persisted in marginalizing them? Focusing on the career of Lucy Diggs Slowe, the first trained African American student affairs professional in the United States, this book examines how her philosophy of "living more abundantly" envisioned educational access and institutionalized campus thriving for Black college women.

Born in 1883, Slowe was orphaned at a young age, raised by a paternal aunt, and earned a scholarship to attend Howard University in 1904. As an undergraduate, she helped found Alpha Kappa Alpha, the first African American sorority in the United States, and served as its first president. After graduating valedictorian of her 1908 class, she excelled as a secondary school teacher and administrator and became a national tennis champion. In 1922, she returned to her alma mater as its first full-time dean of women. Over her fifteen-year tenure at Howard University, Slowe empowered early twentieth-century Black college women to invest in their individual growth, engage in community building, and pursue leadership opportunities. To foster Black women's higher education success, Slowe organized both the National Association of College Women and the National Association of Women's Deans and Advisers of Colored Schools. As she established long-standing traditions and affirming practices to encourage Black women's involvement in the extracurricular life of their campuses, Slowe's deaning philosophy of "living more abundantly" represents an important Black feminist approach to inclusion in higher education.
TAMARA BEAUBOEUF-LAFONTANT is professor and Louise R. Noun Chair in gender, women's, and sexuality studies at Grinnell College. She is the author of Behind the Mask of the Strong Black Woman: Voice and the Embodiment of a Costly Performance. She lives in Grinnell, Iowa.