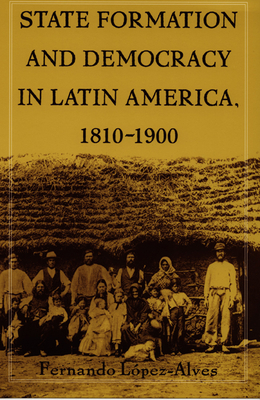 
Not On Our Shelves—Ships in 1-5 Days
Despite a shared colonial past, South American nations experienced different patterns of conflict in the nineteenth century. These differences led to the creation of a variety of states and regimes, from authoritarian military oligarchies to popular democracies. Using a rigorous logic of comparison, Fernando L pez-Alves explores the roots of state building in five countries and explains why the political systems of these early postindependent societies were prone to militarism, corporatism, or liberal democracy.
Breaking with the traditional economic analysis of South American development, L pez-Alves argues that civil-military relations lay at the core of state building. By comparing three countries in particular-Uruguay, Colombia, and Argentina-during an intense phase of state and regime formation, he shows how war and the collective action of the rural poor contributed to the construction of central armies, the rise of new social classes, and the emergence of civilian organizations. He also examines characteristics unique to each country's war-formed culture and discusses how coalitions were built during this period. Examples from Paraguay and Venezuela and references to state formation in Europe, the United States, Asia, and the Middle East add to the complexity and richness of the study's comparative analysis.
Drawing on a vast bibliography of both primary and secondary sources, L pez-Alves goes beyond providing insights into the particular development of Latin American countries and introduces a comprehensive theory of state formation applicable to other regions. This book will interest Latin Americanists, historians, political scientists, and sociologists studying state formation.