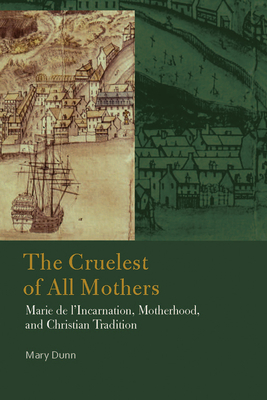 In 1631, Marie Guyart stepped over the threshold of the Ursuline convent in Tours, leaving behind her eleven-year-old son, Claude, against the wishes of her family and her own misgivings. Marie concluded, "God was dearer to me than all that. Leaving him therefore in His hands, I bid adieu to him joyfully." Claude organized a band of schoolboys to storm the convent, begging for his mother's return. Eight years later, Marie made her way to Quebec, where over the course of the next thirty-three years she opened the first school for Native American girls, translated catechisms into indigenous languages, and served some eighteen years as superior of the first Ursuline convent in the New World. She would also maintain, over this same period, an extensive and intimate correspondence with the son she had abandoned to serve God.

The Cruelest of All Mothers is, fundamentally, an explanation of Marie de l'Incarnation's decision to abandon Claude for religious life. Complicating Marie's own explication of the abandonment as a sacrifice carried out in imitation of Christ and in submission to God's will, the book situates the event against the background of early modern French family life, the marginalization of motherhood in the Christian tradition, and seventeenth-century French Catholic spirituality. Deeply grounded in a set of rich primary sources, The Cruelest of All Mothers offers a rich and complex analysis of the abandonment.
Mary Dunn is an assistant professor of early modern Christianity at St. Louis University. Her first book, From Mother to Son: Selected Letters from Marie de l'Incarnation to Claude Martin, was published by Oxford University Press in 2014. She has also published articles in the Canadian HistoricalReview, Quebec Studies, and the Journal of Feminist Studies in Religion, among other journals.