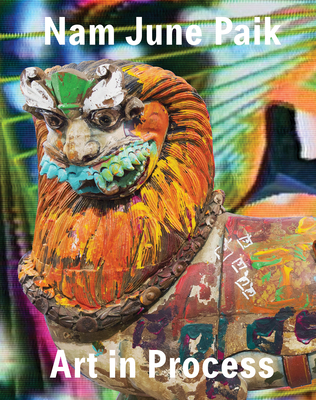 By John Hanhardt (Text by), Gregory Zinman (Text by)


On Our Shelves Now at:
Surveying the work of video art pioneer Nam June Paik, this volume highlights the artist's radical engagement with process.

Nam June Paik (1932–2006) broke new ground in late twentieth-century art, working on a global stage to transform video into an art medium. This book reflects on Paik’s working method as well as the ideas and materials that inspired his art practice. It was published on the occasion of a two-part exhibition at Gagosian, New York, curated by John G. Hanhardt, one of the foremost scholars of Paik’s work. Nam June Paik: Art in Process highlights the centrality of process and exploration across Paik’s career—through his pioneering manipulated televisions from the early 1960s to live global satellite telecasts, large-scale video sculptures, drawings, and the late-style painted TVs—and provides an opportunity to follow Paik’s lifelong engagement with new media and the development of his own singular visual language. Highlights include Paik’s painted sections of the Berlin Wall (2005); Beuys Projection (1990), Paik’s powerful video interpretation of his performance with Joseph Beuys in Tokyo; and his celebrated One Candle, Candle Projection (1988–2000), a live video installation of candlelight.


With essays by John G. Hanhardt and Gregory Zinman, the book features extensive illustrations including numerous full-page plates and details, a foldout of the score for Paik’s Symphony for 20 Rooms (1961), as well as rarely seen archival photographs by Peter Moore (1932–1993) documenting Paik’s early performances.
John G. Hanhardt is an art historian and a curator of film and the media arts. He has curated retrospectives of Nam June Paik’s work at the Whitney Museum of American Art, Solomon R. Guggenheim Museum, and Smithsonian American Art Museum.

Gregory Zinman is Associate Professor of Film and Media in the School of Literature, Media, and Communication at the Georgia Institute of Technology. He is the author of Making Images Move: Handmade Cinema and the Other Arts, and is a coeditor, with John Hanhardt and Edith Decker-Phillips, of We Are in Open Circuits: Writings by Nam June Paik.