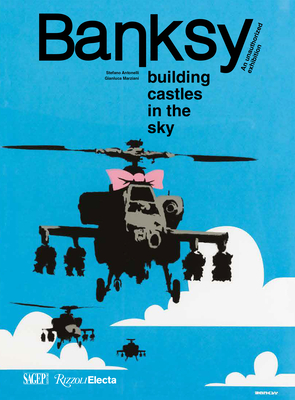 
On Our Shelves Now at:
Catalogue to a major traveling exhibition focused on Banksy, the world’s most popular graffiti artist whose real identity remains unknown despite his domination of the global street art scene for over twenty-five years.

This accessible volume devoted to the enigmatic artist known as Banksy showcases pivotal works from private collections grouped to reveal Banksy’s key reference points and creative drives. The show features more than 100 original iconic works—always topical and certainly never dull—including Girl with Balloon, Gangsta Rat, Monkey Queen, along with lesser-known examples in other media such as “Banksy of England” banknotes, satiric CD covers, posters, and rare T-shirt designs. Laced with caustic and critical messages, Banksy’s works examine capitalism, consumerism, war, social control, freedom, and other features of our time with groundbreaking freshness and immediacy. Insightful essays explore such topics as Banksy’s philosophy, relationship to the art market, and choice to remain incognito. Banksy’s paintings, sculptures, prints, infographic cladograms, and tube maps are accompanied by detailed contextual analysis and a time line with highlights of Banksy’s career.
Stefano Antonelli, an adjunct professor of art at Roma Tre University, curated Europe’s first major Banksy exhibition at the Fondazione Roma Museo. Gianluca Marziani is a curator whose shows have appeared at the Venice Biennale and Festival dei Due Mondi, Spoleto. Acoris Andipa is director of the Andipa Gallery, London. Chiara Canali is a curator and adjunct professor at eCampus University, Milan. Pietro Folena is president and cofounder of MetaMorfosi and president of Artnews srl. Francesca Iannelli is a professor at Roma Tre University. Paola Refice is a superintendent at Italy’s National Ministry of Culture.
"Banksy will go down as one of the most elusive artists of the 21st Century. His work is simple but far from elementary. Despite the British artist’s presence in pop culture and the millions that are paid for his work at auction, very few exhibitions have been hosted to showcase the breadth of his oeuvre. . . “Banksy. Building Castles in the Sky” [features] 120 authenticated works that for the first time will be presented through an academic and interdisciplinary analysis." —HYPEBEAST.COM