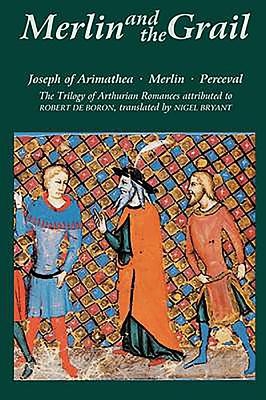 
Not On Our Shelves—Ships in 1-5 Days
This trilogy establishes a provenance for the Holy Grail and, through the figure of Merlin, links Joseph of Arimathea with mythical British history and with the knightly adventures of Perceval's Grail quest. It is hard to overstate the importance of this trilogy of prose romances in the development of the legend of the Holy Grail and in the evolution of Arthurian literature as a whole. They give a crucial new impetus to the story of the Grail by establishing a provenance for the sacred vessel - and for the Round Table itself - in the Biblical past; and through the controlling figure of Merlin they link the story of Joseph of Arimathea with the mythical Britishhistory of Vortigern and Utherpendragon, the birth of Arthur, and the sword in the stone, and then with the knightly adventures of Perceval's Grail quest and the betrayal and death of Arthur, creating the very first Arthurian cycle. Ambitious, original and complete in its conception, this trilogy - translated here for the first time - is a finely paced, vigorous piece of storytelling that provides an outstanding example of the essentially oral nature of early prose. NIGEL BRYANT is head of drama at Marlborough College. He has also provided editions in English of the anonymous thirteenth-century romance Perlesvaus, published as The High Book of the Grail, and Chretien's Perceval: The Story of the Grail.