The Empress and the English Doctor: How Catherine the Great defied a deadly virus (Hardcover) 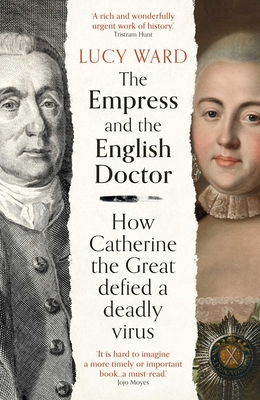 The Empress and the English Doctor: How Catherine the Great defied a deadly virus (Hardcover)


On Our Shelves Now at:
The astonishing true story of how Catherine the Great joined forces with a Quaker doctor from Essex to spearhead one of the first global public health campaigns.

Within living memory, smallpox was a dreaded disease. Over human history it has killed untold millions. Back in the eighteenth century, as epidemics swept Europe, the first rumours emerged of an effective treatment: a mysterious method called inoculation.

But a key problem remained: convincing people to accept the preventative remedy, the forerunner of vaccination. Arguments raged over risks and benefits, and public resistance ran high. As smallpox ravaged her empire and threatened her court, Catherine the Great took the momentous decision to summon the Quaker physician Thomas Dimsdale to St Petersburg to carry out a secret mission that would transform both their lives. Lucy Ward expertly unveils the extraordinary story of Enlightenment ideals, female leadership and the fight to promote science over superstition.

‘A rich and wonderfully urgent work of history’ Tristram Hunt
Lucy Ward is a writer and former journalist for the Guardian and Independent. As a Westminster Lobby correspondent, she campaigned for greater women’s representation. From 2010–12, she lived with her family in Moscow, renewing her interest in Russian history. After growing up in Manchester, she studied Early and Middle English at Balliol College, Oxford. She now lives in Essex.
‘[A] sparkling history book with a fairytale atmosphere of sleigh rides, royal palaces and heroic risk-taking… This is exactly the book we need to read at the moment.’
— The Times

‘This gripping account of her deep friendship with an English doctor – and their battle to save the Russian people from the scourge of smallpox – shows [Catherine the Great] in an entirely different light.’
— Daily Mail

‘Mirroring so many of the vaccination issues of our modern age, as well as those of bodily autonomy, feminism, and power…a must-read.’
— Jojo Moyes

‘Timely and engaging… A truly fascinating book that reads like a thriller.’
— Venki Ramakrishnan, Nobel laureate and former president of the Royal Society

‘Lucy Ward has zoomed in on one of the more dramatic episodes in that dramatic century… vivid.’
— Economist

‘An enthralling tale of two remarkable personalities who risked all for the benefit of mankind, and of a struggle between medical science and human instinct that could not be more relevant today.’
— Adam Zamoyski

‘A rich and wonderfully urgent work of history which engagingly recounts one of the greatest moments in modern science and public health: a story of Enlightenment conviction, Court intrigue, Anglo-Russian relations, and timeless, personal bravery. An expertly recounted eighteenth-century tale of political leadership and medical progress with obvious insights for today.’
— Tristram Hunt, director of the Victoria and Albert Museum

‘So meticulously researched, well-paced and finely written is this tale of medical drama and royal daring that one quickly forgets that it is Lucy Ward’s first book. Her story is a remarkable one, full of contemporary resonance, but fascinating in its own right… a real page-turner.’
— Matthew D’Ancona, Tortoise

‘In this fluent and enlightening account of the fight to eradicate the terrifying scourge of smallpox, Ward deftly describes how an English Quaker doctor, Thomas Dimsdale, played a crucial role as a pioneer of the new technique of inoculation… The Empress and the English Doctor is a gripping read and all the more timely and extraordinary for having been written in the midst of the Covid pandemic.’
— Dr Helen Rappaport, bestselling author and historian

‘This is a fascinating and meticulously researched book with the excitement of a thriller. It’s a remarkable story of female leadership and personal courage. Lucy Ward uses her brilliance as a narrator combined with her insight as a former Lobby journalist to bring to life one of history’s most powerful women who really did “follow the science”.’
— Harriet Harman MP

‘Packed with political intrigue and scientific insight, this is a fascinating narrative revealing how early inoculation pioneers overcame superstition, prejudice and misinformation. Move forward more than two centuries and the parallels with the current Covid-19 pandemic are incredible!’
— Jonathan Ball, professor of virology, University of Nottingham

‘This is a wonderful book. It tells the story of the greatest medical discovery before Pasteur, inoculation against smallpox, through the life of a Quaker doctor, Thomas Dimsdale, and his journey to Russia to treat Catherine the Great… It’s a long time since I’ve read a history book as beautifully constructed as this – it’s a remarkable achievement.’
— David Wootton, anniversary professor of history, University of York, and author of The Invention of Science

‘This is a remarkable and fascinating story of scientific discovery, breakthrough medicine and inspirational female leadership by Catherine the Great. The revelations in this book resonate with today’s battle against Covid-19. Lucy Ward has undertaken brilliant detective work… This is a must-read book.’
— Sir Norman Lamb, former UK Health Minister

‘Timely… The author demonstrates beautifully how London has historically led on the science with first “inoculation” and then “vaccination” – indeed, longer than most people realise.’
— Professor Dame Sally Davies, former Chief Medical Officer for England

‘A tale of multiple and intertwining themes – private and public health, public administration, and the politics of Empires… Although the book is about things that happened over 250 years ago, the hopes and fears of the people facing those difficult choices resonate with our own times.’
— Laurie Bristow, former UK ambassador to the Russian Federation

‘Women’s role in driving forward key scientific discoveries has too often gone unrecognised. The Empress and the English Doctor honours Catherine the Great’s pioneering scientific journey, demonstrating her personal bravery, her exacting insight and her resolve to protect others against smallpox. This thrilling and important story offers an insight into the determination, tenacity and grit needed to work in science, even today!’
— Professor Teresa Lambe, Professor of Vaccinology and Immunology, University of Oxford and co-designer of the Oxford AstraZeneca vaccine

‘Timely and engaging…the unlikely and remarkable story of how an English doctor, Thomas Dimsdale, and Catherine the Great, the Empress of Russia, showed great personal courage and took serious personal risks to promote inoculation against smallpox using a method that had originated in Asia. The success of these early efforts led directly to the first vaccine by Jenner, and over the next two centuries saved millions of lives that would have been lost to many different diseases, culminating in the recent vaccines against Covid-19. A truly fascinating book that reads like a thriller.’
— Venki Ramakrishnan, Nobel laureate and former president of the Royal Society

‘A fascinating, deep dive into a neglected topic in the history of vaccines, with many lessons for the prevention of viruses today. Lucy Ward blends history and personality to shed light on a story that has been overlooked in favour of Jenner and his milkmaid.’
— Dr John Tregoning, Reader in Respiratory Infections, Imperial College London

‘An entertaining account… Brimming with vivid historical details, this is a memorable account of a medical and social breakthrough.’
— Publishers Weekly

‘An extraordinary and fascinating story’
— Choice

‘A combination of arcane detail and the high colour of a period drama.’
— Spectator

'Ward ably contextualises the event within the intellectual currents of the era... Astute.'
— Lancet

'[a] gripping story of Enlightenment ideals, female leadership, and the fight to promote science over superstition.'
— New York Public Library, Books of the Year

‘Offers unforced parallels with our present … At the heart of this learned, erudite book, full of rich and legible scientific detail, is the extraordinary, and extraordinarily moving, dynamic between the Empress and Dimsdale … [a] rather thrilling account.’
— The Critic, Books of the Year