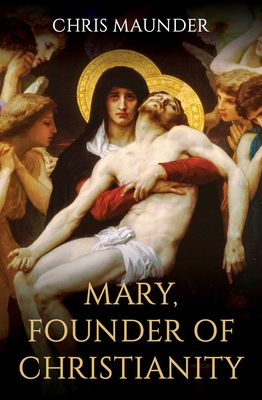 
In Stock—Click for Locations
Who was Mary? A radical rediscovery of the historical mother of Jesus

Despite the commonly held assumption that the Bible says little about the mother of Jesus, there are many indications that Mary preceded and inspired her son in fostering the emergence of a new faith community. In the Gospel of John, Mary instigates Jesus’ first miracle, and in all four gospels she is present at the crucifixion, suggesting hers was a place of unparalleled importance in the Christian story.

Setting aside presuppositions based on doctrine, Chris Maunder returns to the New Testament to answer the question ‘Who was Mary?’ He re-examines the virgin conception of Jesus, Mary’s contribution to Jesus’ ministry, and her central role in the events of the crucifixion and the resurrection. In so doing, Maunder casts a thought-provoking new light on Mary and the women, including Mary Magdalene, who stood alongside her.
Chris Maunder is a visiting fellow in Theology and Religious Studies at York St John University. He is the author of Our Lady of the Nations: Apparitions of Mary in 20th-Century Catholic Europe, and the editor of The Oxford Handbook of Mary, Origins of the Cult of the Virgin Mary and Documents of the Christian Church, third and fourth editions. He lives in Knaresborough, North Yorkshire, with his wife, Natalie.
‘Heroically measured and utterly meticulous… Mary is a signpost both to the past and to the future. She is important. All credit to Chris Maunder for fighting so heroically, inch by passionate inch, to try and allow some extra room for her.’
— Nicola Barker, Spectator

'Refreshing… it is good to see Chris Maunder’s work as a potential for a meeting of minds between those starting from very different perspectives… There is a valuable discussion here on the role of symbolism and metaphor in the use of Scripture… Maunder’s penultimate chapter is headed “Mary and the Incarnation”, and for that section alone there would be justification for buying his book.'
— Catholic Herald

'Mother Mary’s contributions to the establishment of Christianity are brought to the fore in this provocative treatise by Maunder... Even those who disagree with Maunder’s unorthodox biblical readings will acknowledge the boldness and originality of what’s on offer.'
— Publishers Weekly

‘Maunder answers the burning questions around Mary’s role in the Christian faith, using a scholar’s approach that gives the nonacademic reader an understanding of why the historical mother of Jesus is so important to the foundation of Christianity… Maunder offers plenty of resources in his footnotes, adding further interest for readers interested in studying Christian history.’
— Booklist

‘A welcome addition to the recent resurgence of research on the Marys, and on the leadership of women in early Christianity. In particular, Maunder’s focus on Mary of Nazareth’s status within the family of Jesus is a plausible and culturally relevant approach to an important issue, presented in an accessible and intriguing way.’
— Mary Ann Beavis, Professor Emerita, St Thomas More College, University of Saskatchewan

‘An excellent examination of the portrait of Mary, Jesus’ mother, according to the canonical gospel accounts.’
— Ally Kateusz, Wijngaards Institute of Catholic Research

‘The book offers the reader much… especially its outline of biblical criticism, which will be particularly useful to those called on to describe modern scholarship… [Maunder’s] case is well argued… His other theme – to explain, challenge and re-contextualise the patriarchy of the Christian tradition – is also handled with care… He writes that this is a book for “free thinkers in the Christian tradition” and its approach will resonate with many PCN members.’
— Progressive Voices

‘Chris Maunder undertakes an important but complicated task in this book. He wants to recover Mary for a world in which women have equal voice and in which a virgin bearing a child seems unbelievable. Like the search for the historical Jesus, Maunder’s search for the historical Mary begins with a framework for interpretation that distinguishes between an historical event and its metaphoric presentation in the gospels. In this reading framework, he finds Mary present before, throughout, and at the end of Jesus’ ministry. He argues for her significant presence in the early church in Jerusalem. In this way, Mary is imagined as a co-founder of Christianity. This is indeed a book for “free thinkers in the Christian tradition” who might find in a reconsideration of Mary an escape from the “delusion of male and hierarchical supremacy”.’
— Jo-Ann Badley, Dean of Theology and Associate Professor of New Testament, Ambrose University

‘The reader is given an attractive and rich theology of Mary in the New Testament… There is… some interesting and careful speculation towards the end of the book on the plethora of Maries at the cross and resurrection, in view of the later traditions of the leadership of the Jerusalem Christian community.’
— Church Times

‘Chris Maunder sets out to place Mary, mother of Jesus, front and centre in the founding story of Christianity… [Maunder] argues his case with fluency and energy. His research and references are thorough and densely presented.’
— Reaction