A Buddhist Response to the Climate Emergency (Paperback) 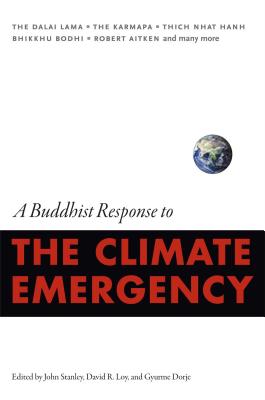 A Buddhist Response to the Climate Emergency (Paperback)


Special Order—Subject to Availability
Never before have so many teachers from all Buddhist traditions - Zen, Vajrayana, Theravada, Vipassana; from the West and the East - come together to offer a unified response to a matter of utmost urgency. This watershed volume is at the same time a clarion call to action and a bright beacon of hope. With contributions from: His Holiness the Dalai Lama, the Seventeenth Karmapa, Sakya Trizin, Dudjom Rinpoche, Chatral Rinpoche, Ato Rinpoche, Dzongsar Khyentse Rinpoche, Thrangu Rinpoche, Dzigar Kongtrul Rinpoche, Chokyi Nyima Rinpoche, Ringu Tulku Rinpoche, Tsoknyi Rinpoche, Robert Aitken, Joanna Macy, Bhikkhu Bodhi, Joseph Goldstein, Taigen Dan Leighton, Susan Murphy, Matthieu Ricard, Hozan Alan Senauke, Lin Jensen, and Thich Nhat Hanh.
John Stanley, PhD, is a biologist who has led research groups in Canada, Switzerland, and the UK. He has held both university and government positions. He is a member of the New York Academy of Sciences. David R. Loy's previous books include the acclaimed Money, Sex, War, Karma, The Great Awakening: A Buddhist Social Theory, and The Dharma of Dragons and Daemons, a finalist for the 2006 Mythopoeic Scholarship Award. He was the Besl Professor of Ethics/Religion and Society at Cincinnati's Xavier University. Gyurme Dorje holds a PhD in Tibetan Literature and an MA in Sanskrit with Oriental Studies. From 1991 to 1996 he held research fellowships at London University, where he worked on the Encyclopaedic Tibetan-English Dictionary. He has written, edited, translated and contributed to numerous books on Tibetan culture.