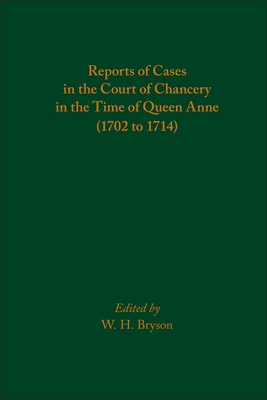 This is book number 581 in the Medieval and Renaissance Texts and Studies series.

This book is a part of an ongoing project to publish the early modern manuscript law reports from the Court of Chancery during the reign of Queen Anne (1702–1714). This new edition triples the number of case reports currently in print, making them accessible to scholars for the first time. The previously existing printed reports are not very reliable, and they paint the then-Lord Chancellor, Lord Harcourt, in a very poor light. This new material gives a better, unbiased, understanding of the Court of Chancery during this period. There are three major manuscript collections printed here, the most notable written by William Melmoth. This volume is the predecessor volume to the recently published Chancery Reports in the Time of King George I.
W. H. Bryson is the Blackstone Professor of Law at the University of Richmond. He is a member of the Virginia State Bar and fellow of the Royal Historical Society.