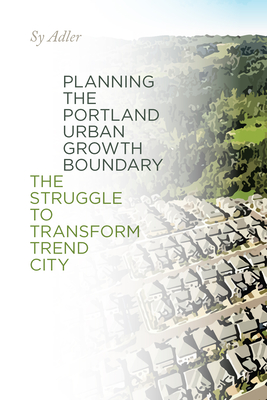 In this companion volume to his 2012 book Oregon Plans: The Making of an Unquiet Land-Use Revolution, Sy Adler offers readers a deep analysis of planning Portland’s Urban Growth Boundary. Required by one of Oregon’s nineteen statewide planning goals, a boundary in the Portland metropolitan area was intended to separate urban land and land that would be urbanized from commercially productive farmland. After adopting the goals, approving the Portland growth boundary in 1979 was the most significant decision the Oregon Land Conservation and Development Commission has ever made, and, more broadly, is a significant milestone in American land-use planning.

Planning the Portland Urban Growth Boundary primarily covers the 1970s. Innovative regional planning institutions were established in response to concerns about sprawl, but planners working for those institutions had to confront the reality that various plans being developed and implemented by city and county governments in metro Portland would instead allow sprawl to continue. Regional planners labeled these as “Trend City” plans, and sought to transform them during the 1970s and thereafter.

Adler discusses the dynamics of these partially successful efforts and the conflicts that characterized the development of the Portland UGB during the 1970s—between different levels of government, and between public, private, and civic sector advocates. When the regional UGB is periodically reviewed, these conflicts continue, as debates about values and technical issues related to forecasting future amounts of population, economic activity, and the availability of land for urban development over a twenty-year period roil the boundary planning process.

Planning the Portland Urban Growth Boundary is an authoritative history and an indispensable resource for anyone actively involved in urban and regional planning—from neighborhood associations and elected officials to organizations working on land use and development issues throughout the state.

Sy Adler has been researching and writing about various aspects of urban and regional planning in Oregon and Portland since 1982, when he arrived to teach at Portland State University, drawn in part because of the innovative city and regional plans and state initiatives that had been adopted and implemented. He is currently interim dean of the College of Urban and Public Affairs at Portland State University.