A Force for Nature: Nancy Russell's Fight to Save the Columbia Gorge (Paperback) 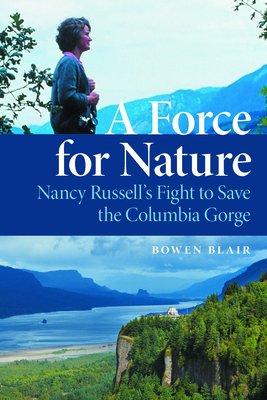 A Force for Nature: Nancy Russell's Fight to Save the Columbia Gorge (Paperback)


Not On Our Shelves—Ships in 1-5 Days
A Force for Nature is a biography of Nancy Russell and her successful campaign to establish and protect the Columbia River Gorge National Scenic Area. Bowen Blair tells the story of the activist who fought one of the most fiercely contested conservation battles of the 1980s, interweaving it with the natural and political history of the legendary landscape that inspired her.

The 85-mile-long Columbia Gorge forms part of the border between Oregon and Washington and is one of the nation’s most historic and scenic landscapes. Many of the region’s cultural divisions boil over here—urban versus rural, west of the mountains versus east—as well as clashes over private property rights, management of public lands, and tribal treaty rights.

In the early 1980s, as a new interstate bridge linked the City of Portland to rural counties in Washington, the Gorge’s renowned vistas were on the brink of destruction. Nancy Russell, forty-eight years old and with no experience in advocacy, fundraising, or politics, built a grassroots movement that overcame 70 years of failed efforts and bitter opposition from both Oregon and Washington governors, five of the six Gorge counties, 41,000 Gorge residents, and the Reagan administration. While building her campaign, Russell stopped subdivisions, factories, and government neglect through litigation brought by her organization, Friends of the Columbia Gorge, and last-second land purchases by the Trust for Public Land (TPL). Initially ignored, then demonized, Russell’s tires were slashed and her life threatened.

The Columbia River Gorge National Scenic Area Act barely passed—on the last day of the congressional session in 1986—and was signed by a reluctant President Reagan hours before the bill would die. Russell positioned the Friends to be a watchdog and orchestrated the purchase of thousands of acres of land for the public. Bowen Blair, an attorney, former executive director of Friends of the Columbia Gorge, and TPL senior vice president, brings an insider’s perspective to the tumultuous and inspiring story of this conservation battle.

Bowen Blair is an environmental attorney who has protected some of the nation’s most important landscapes. In the Columbia Gorge, Blair helped draft and lobby the act that established the country’s most prominent national scenic area and negotiated the purchase of thousands of acres for public parks and tribal homelands. He was later appointed by two Oregon governors to the Gorge Commission, which he chaired.

“Author Bowen Blair had a front-row seat at one of the late 20th century’s most protracted, unlikely, and ultimately successful conservation stories, and his telling of it reads like a whodunnit. He compellingly traces his protagonist’s journey from self-described ‘small and provincial’ housewife to one of the country’s most admired public lands advocates as she goes toe-to-toe with US senators and overcomes myriad reversals, even death threats.” —Bonnie Henderson, author of The Next Tsunami and Hiking the Oregon Coast Trail

“In a time when the world feels tilting towards despair, read this book. Learn from the example of one courageous woman who didn't know how to give up and overcame what seemed insurmountable odds to give us, and future generations, a national treasure--the unspoiled beauty of the Columbia River Gorge.  This sweeping story, meticulously researched, affords us much needed hope that values such as integrity, idealism and altruism still exist.” —Marcy Houle, author of A Generous Nature and The Prairie Keepers