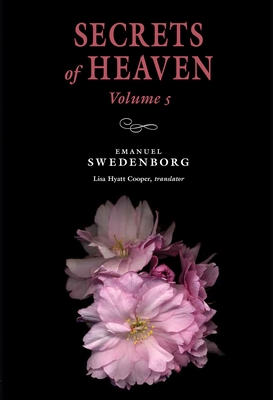 This is book number 5 in the New Century Edition series.

This fifth volume continues the exposition with an examination of Jacob’s story, as found in Genesis 27–30. Jacob’s flight to his uncle Laban’s house, where he initially labors for the right to marry, then weds Leah and Rachel, and eventually rises to great prosperity, parallels the stage of Jesus’ transformation in which his earthly self (represented by Jacob) had to climb from attachment to outer truth (Leah) to a love of inner truth (Rachel) so that his earthly self could become fully divine. Within each chapter, Swedenborg also addresses the decline of the Christian church and unfolds his foundational premise that heaven, as a whole and in detail, is in God’s image and can therefore be called the “universal human.”

This new translation, part of the New Century Edition series, makes Swedenborg’s insights into Scripture and his accounts of his spiritual experiences more accessible than ever before.

Emanuel Swedenborg (1688–1772) was a Swedish scientist, nobleman, and theologian who spent his life investigating the mysteries of the soul. Born in Stockholm to a staunchly Lutheran family, he graduated from the University of Uppsala and then traveled to England, Holland, France, and Germany to study with the leading scientists of the time. He gained favor with Sweden’s King Charles XII, who gave him the position of overseer of the Swedish mining industry. Later, he was given a seat on the Swedish House of Nobles by Charles XII’s successor, Queen Ulrika Eleonora. Between 1743 and 1745, he began to have visions of heaven, hell, and Jesus Christ, which resulted in a stream of books about the nature of God, the afterlife, and the inner meaning of the Bible. He devoted the last decades of his life to studying Scripture and presenting his own unique theology to the world.