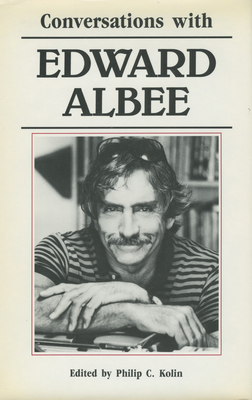 
Not On Our Shelves—Ships in 1-5 Days
Edward Albee has reigned over the American theater since 1959. By transporting the techniques of European absurdism to American soil, he ushered in a new era in the American theater. He has said he won two and one-half Pulitzers---one for Delicate Balance, one for Seascape, and the one-half supposedly for Virginia Woolf, which the Pulitzer committee denied to Albee in 1962 because they objected to the language of the play.

Albee's numerous roles and achievements are reflected in the lively interviews in this collection. These reveal the many sides and responses of one of the most significant dramatists of our age. In them we see the poised and guardedly amiable Albee; the angry Albee; the speculative and philosophical Albee; the historical-critical Albee; and the witty Albee.

Albee talks knowledgeably and frankly about every phase of staging his plays---the many personalities involved in the process and the playwright's prerogatives, which he jealously guards.

Philip C. Kolin is University Distinguished Professor in the College of Arts and Letters at the University of Southern Mississippi, where he teaches classes on American drama and Shakespeare.