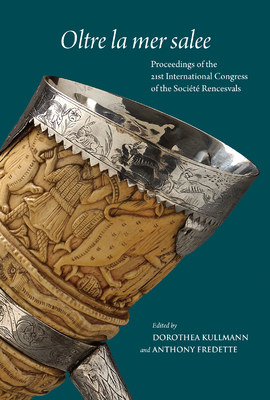 
Special Order—Subject to Availability
Oltre la mer salee collects revised versions of twenty-eight papers in English, French, Italian, and Spanish originally presented at the 21st International Congress of the Societe Rencesvals pour l'etude des epopees romanes, held in August 2018 in Toronto. Specialists in the field of medieval Romance epic reconsider traditional approaches and present novel research perspectives. Their studies are divided among four major themes: family relations, manuscripts, French epic in England, and travel and exchanges. Although covering a broad spectrum of French, Occitan, Italian, and Spanish epic texts, particular attention is given to late-fourteenth-century epic and to fourteenth- and fifteenth-century prose adaptations. Exchanges between languages and cultures play a major role, both within the epics and throughout the history of their reception. The volume includes contributions on modern adaptations, on parallels between medieval Romance epic and other literatures -- from Greek popular song to Brazilian cordeis -- and on fragments of epic manuscripts that survived in the Middle East. Other contributions reflect on the interactions between Romance epic and the Latin language, and between French epic and the fine arts. This volume thus convincingly demonstrates one of the key elements of the enduring appeal of medieval Romance epic: its astonishingly international quality, both in the Middle Ages and today. It will be of interest both to specialists of Romance epic and to students of medieval Romance literature and related disciplines, as well as to anyone interested in an overview of current research in the field.
Dorothea Kullmann taught at Gottingen, Heidelberg, and Avignon before becoming an Associate Professor in French and Medieval Studies at the University of Toronto in 2005. She is the author of Verwandtschaft in epischer Dichtung (1992), and Description. Theorie und Praxis der Beschreibung im franzosischen Roman von Chateaubriand bis Zola (2004), and has published numerous articles ? and edited several volumes ? on medieval and modern Romance literatures. A specialist of Old French and Old Occitan epic, she is also interested in vernacular religious literature, in the classical tradition, and in the interaction between languages in the Middle Ages, as well as in diachronic linguistics and historical narratology. She currently leads the SSHRC project Livres d'heures: textes et langue. Anthony Fredette recently completed a doctorate at the University of Toronto's Centre for Medieval Studies. His thesis, under the direction of Dorothea Kullmann, studies the ways in which medieval authors writing in French, Occitan, and Latin made use of Statius' Thebaid, often through the intermediary of Latin commentary. The various versions of the Old French Roman de Thebes are a special focus of this study. He is currently teaching Latin while involved in ongoing projects editing medieval commentaries on classical authors.