Gods of Love and Ecstasy: The Traditions of Shiva and Dionysus (Paperback) 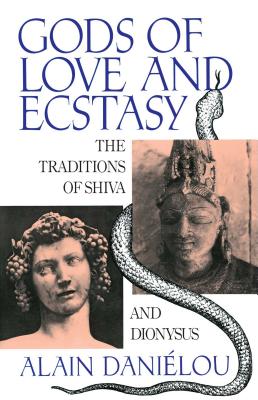 Gods of Love and Ecstasy: The Traditions of Shiva and Dionysus (Paperback)


Not On Our Shelves—Ships in 1-5 Days
Shiva and Dionysus are the Hindu and Greek gods of magical power, intoxication, ecstatic sexuality, and transcendence who initiate us into communion with the creative forces of life. Revealing the earliest sources of the traditions of Shiva and Dionysus, Alain Danielou reconstructs the fabric of our ancient relationship with creation, vividly relating practices that were observed from the Indus Valley to the coasts of Portugal at least six thousand years ago.
Alain Daniélou (1907-1994) spent more than 15 years in the traditional society of India, using only the Sanskrit and Hindi languages and studying music and philosophy with eminent scholars. He was duly initiated into esoteric Shaivism, which gave him unusual access to texts transmitted through the oral tradition alone. He is the author of more than 30 books on the religion, history, and arts of India and the Mediterranean.
"Danielou's books are remarkable for their clarity, scholarship, and uninhibited celebration of erotic and mystical ecstasy."
— Interview Magazine

"Gods of Love and Ecstasy makes compelling reading with so much information on the role played by gods and goddesses, revealing the theological complexity of this ancient cult. This book also includes many references and sources along with a fascinating chronological chart dating back to 15,000 BC. Highly recommended!"
— Jane Lee, New Dawn, May-June 2002

"While written nearly thirty years ago, the message of Gods of Love and Ecstasy is more critical today than ever, as it points the way towards reestablishing our links to the energies these archetypes represent, and their power in the material world."
— The Institute of Hermetic Studies, Dec 2007