The Pagan Book of Days: A Guide to the Festivals, Traditions, and Sacred Days of the Year (Paperback) 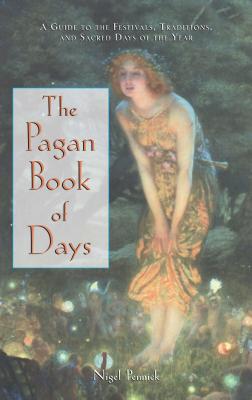 The Pagan Book of Days: A Guide to the Festivals, Traditions, and Sacred Days of the Year (Paperback)


Not On Our Shelves—Ships in 1-5 Days
• A daybook containing information about rituals and celebrations that have for centuries been associated with the changing seasons of the year.

Pagan rites and festivals are at the root of many traditional holidays in the Western world. Embracing a sensitivity we have lost, the Pagan traditions emphasize mystical spirituality, reverence for the feminine principle, and the links between people and the earth. This unique daybook contains a treasury of information about rituals and celebrations that have for centuries been associated with the changing seasons of the year. Included are the observances of the ancient Greek, Roman, Celtic, Anglo-Saxon, and Norse traditions, as well as Wiccan traditions and the worship of the Goddess.

In The Pagan Book of Days the author provides details on auspicious and inauspicious days, holy days of ancient gods and goddesses, and the eight stations of the year (the solstices, equinoxes, and cross-quarter days). He also includes lunar and solar charts indicating dates of major Pagan celebrations from the year 2011 through 2033. Illustrations throughout depict images from the classical and northern European traditions. The Pagan Book of Days is an enlightening way to incorporate these ancient cultural and spiritual practices and awarenesses into your daily life.
Nigel Pennick is an authority on ancient belief systems, traditions, runes, and geomancy and has traveled and lectured extensively in Europe and the United States. He is the author and illustrator of more than 50 books, including The Pagan Book of Days. The founder of the Institute of Geomantic Research and the Library of the European Tradition, he lives near Cambridge, England.
"Month by month, Pennick lists and elucidates festivals, traditions, and sacred days from the 'pagan' calendar. Includes ancient Greek, Roman, Celtic, Anglo-Saxon, Norse, Goddess, Mystery, and to some extent Wicca."
— NAPRA Trade Journal

"This book is worth reading for the people who try to understand the significance of the festivals in our life time. The books writings are in simple language and easy to follow."
— Shankerprasad S. Bhatt