Animals and Psychedelics: The Natural World and the Instinct to Alter Consciousness (Paperback) 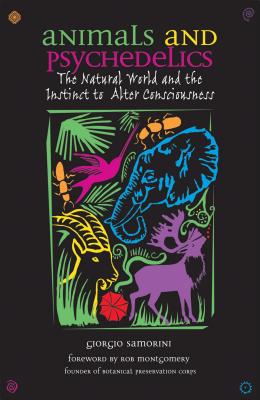 Animals and Psychedelics: The Natural World and the Instinct to Alter Consciousness (Paperback)


Not On Our Shelves—Ships in 1-5 Days
An Italian ethnobotanist explores the remarkable propensity of wild animals to seek out and use psychoactive substances.

• Throws out behaviorist theories that claim animals have no consciousness.

• Offers a completely new understanding of the role psychedelics play in the development of consciousness in all species.

• Reveals drug use to be a natural instinct.

From caffeine-dependent goats to nectar addicted ants, the animal kingdom offers amazing examples of wild animals and insects seeking out and consuming the psychoactive substances in their environments. Author Giorgio Samorini explores this little-known phenomenon and suggests that, far from being confined to humans, the desire to experience altered states of consciousness is a natural drive shared by all living beings and that animals engage in these behaviors deliberately. Rejecting the Western cultural assumption that using drugs is a negative action or the result of an illness, Samorini opens our eyes to the possibility that beings who consume psychedelics--whether humans or animals--contribute to the evolution of their species by creating entirely new patterns of behavior that eventually will be adopted by other members of that species. The author's fascinating accounts of mushroom-loving reindeer, intoxicated birds, and drunken elephants ensure that readers will never view the animal world in quite the same way again.
Ethnobotanist and ethnomycologist Giorgio Samorini has studied the use of psychoactive substances for more than 20 years, conducting research in Africa, Latin America, India, and Europe. He is editor-in-chief of the scientific journal Eleusis, Plants and Psychoactive Compounds. He lives in Italy.
"Samorini's observations support his controversial hypothesis that human drug-taking derives from a universal biologically-based drive to alter consciousness. This perspective on drug-taking behavior can only enlarge our own views about the phenomenon which, in many humans, has become so contentious."
— Rick Strassman, author of DMT: The Spirit Molecule and Clinical Associate Professor of Psychiatry, U

"Samorini offers support for not only the theory of a biological basis of the pursuit of altered states, but also the possibility that this activity may expand the behavioral repertoire, thus altering evolution. Provocative reading."
— Julie Holland, MD, Editor, Ecstasy: The Complete Guide Assistant Professor of Clinical Psychiatry, B

"This must be one of the most important books about animals - or drugs - that you are likely to read."
— Mark Pilkington, Fortean Times, December 2002

“Giorgio Samorini’s text is a beautiful little object. Not only is the information that it contains fascinating, but also pitched at a level that is very engaging and thought-provoking. The question of intentionality and the natural inclination toward intoxication is neatly crafted together and explored, and gives the impression that this field of study is well worth further investigation by researchers.”
— Psychedelic Press UK, January 2013