College Apologetics: Proof of the Truth of the Catholic Faith (Paperback) 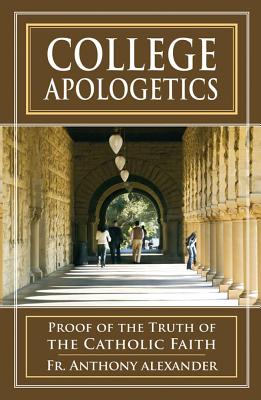 College Apologetics: Proof of the Truth of the Catholic Faith (Paperback)


Not On Our Shelves—Ships in 1-5 Days
Fr. Anthony Alexander states that "Apologetics is the study in which we prove by reason that the Roman Catholic] Church is the agency set up by God to carry on His work of teaching the doctrines of supernatural religion" (page 5). The author calls this book College Apologetics because it is written for the college-level student, i.e., the adult mind, which is able to grasp on an academic level the facts he arrays here before the reader. His readership, therefore, would also include upper-level high school students. "College Apologetics is not just another nice book of apologetics. It is rather the classic treatment of the subject-undated and undatable, precisely reasoned, and carrying the reader through a series of logic gates that begin with the proof of the existence of God and follow logically through the proof of the existence of the human soul, the necessity of religion, the reliability of the Gospels, the claims of Christ and the proofs thereof, the reason for His coming, the nature of His Church, its four classic identifying marks, the 'moral miracle' of the Catholic Church and, finally, its infallibility as the religious Teacher of mankind." (Publisher's Preface, page x.). Not only is the book's logic ironclad, it also unveils the great historical evidence for the veracity of the Church from extant writings of some of the greatest historical figures of the first centuries after Christ. This book is a work of genius. That it was even written is a great grace, for it is destined to do tremendous good in our confused times. "Because we need the Church of Christ for salvation, we need to know which is the true Church of Christ; and because in the Western world since the Protestant Reformation we have a multiplicity of Christian 'churches', the identity of the True Church of Jesus Christ becomes for some people a mystery. It will not be a mystery after a reading of Fr. Alexander's College Apologetics." (Publisher's Preface, pages x-xi).
The Rev. Father Anthony F. Alexander was a priest and author of the twentieth century. Additionally, he used to work with the Department of Theology at John Carroll University. His College Apologetics: Proof of the Truth of the Catholic Faith was written for the college-aged student, and treats the topic classically, reasonably, and logically. Father Alexander's work was first published in 1954 by the Henry Regnery Company, Illinois, with the Nihil Obstat and Imprimatur. It was also printed by TAN in 1982.