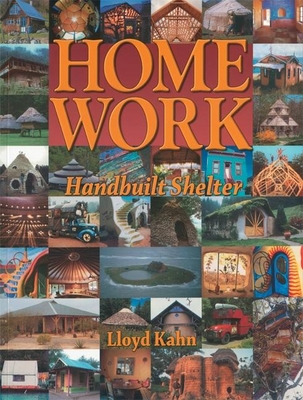 
Not On Our Shelves—Ships in 1-5 Days
Building on the enormous success of the original Shelter, Lloyd Kahn continues his odyssey of finding and exploring the most magnificent and unusual hand-built houses in existence. Among the intriguing domiciles described in Home Work are a Japanese-style stilt house accessible only by a cable across a river; a stone house in a South African valley whose roof serves as a baboon trampoline; multi-level treehouses on the South China Sea; and a bottle house in the Nevada desert. Over 1,500 photos illustrate various innovative architectural styles and natural building materials that have gained popularity in the last two decades such as cob, papercrete, bamboo, adobe, strawbale, timber framing, and earthbags.

Shelter, it turns out, had a major influence on builders, and included are buildings our 1973 book inspired, so this is truly a sequel.