Friendly Fire at the Veterans Hospital: The Conspiracy Concealing Malpractice and Mistreatment of Us Veterans (Paperback) 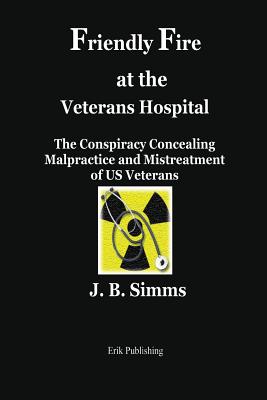 Friendly Fire at the Veterans Hospital: The Conspiracy Concealing Malpractice and Mistreatment of Us Veterans (Paperback)

Stories which you hear about mistreatment of Veterans at VA hospitals continue to shock the public, but the cover-up, as they say, is always worse than the crime. Was mistreatment and malpractice of Veterans at the Radiation Department at Long Beach (CA) Veterans Hospital a crime? Was giving radiation treatment to the wrong areas of the body a crime? Was the denial and cover-up by doctors, a hospital director, administrators, and investigative agencies, a crime? There was only one person who raised the issue that therapists were giving inaccurate radiation therapy treatment to our US Veterans: that person was the supervisor of the therapists. When the therapists lied to hide what they had done, the Chief Therapist reported their behavior and gained the approval to fire the therapists. The therapists had a cavalier attitude and had leverage against the doctors which kept them from being fired. In order to obtain accreditation by the ACR, the hospital attacked the Chief Radiation Therapist, stripped her of her authority, and allowed rampant malpractice and mistreatment to continue. The wounding of the Veterans in the Radiation Therapy Department was no accident; the therapists just did not care, and no one was going to hold them accountable. Patients injured while receiving radiation therapy were sent to the emergency room for treatment, or to a hyperbaric chamber. All injuries, and wounding, were written up as "side effects" and no one listened to the Chief Therapist. The doctors controlled what was being told to the wounded Veteran patient. The therapists controlled the doctors, and each department had professional and personal leverage on one another to the point that no person would ever be accountable for their actions. Whistleblower agencies were purposely ineffective and betrayed this Chief Radiation Therapist. This is the story of the brave Chief Radiation Therapist who was the only person to defend the Veterans, and ultimately saved lives, at the cost of her physical and emotional health.