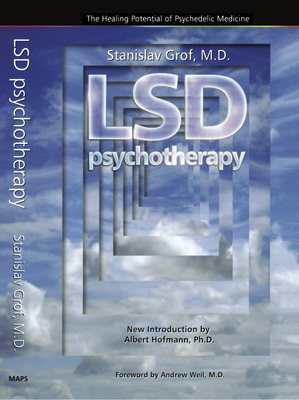 
Not On Our Shelves—Ships in 1-5 Days
The sensationalism surrounding the widespread use of LSD in the late 1960s and the subsequent legislative overkill virtually ended psychotherapeutic LSD research. Much of what had been learned over thirty years of scientific medical study was so distorted or suppressed that no objective overview was available to the general reader except for this book. LSD Psychotherapy is a complete account of a remarkable chapter in the ever-continuing inquiry into our transpersonal nature and origins. The controlled studies described in this book reveal exciting and challenging data about the nature of human consciousness, perception, and reality itself. Drawing on this work, Stanislav Grof outlines a new cartography of the human mind, one which accounts for experiences such as shamanic trances, near-death experiences and altered states of consciousness. This vision is also the foundation for Dr. Grof's revolutionary Holotropic Breathwork techniques. This book is also a visual feast, with numerous color drawings and paintings created by research participants (see featured artist Sherana Harriette Frances' book, Drawing It Out: Befriending the Unconscious. Many of these depict archetypal images from the collective human consciousness, forming a powerful addition to the text. LSD Psychotherapy is a valuable source of information for those who are involved with LSD in any way, whether as parents, teachers, researchers, legislators, or students of the human psyche. The approach to healing described in this book is inspired by the eternal desire of humankind for wholeness and an enduring grasp of reality.