Why We Believe in God(s): A Concise Guide to the Science of Faith (Paperback) 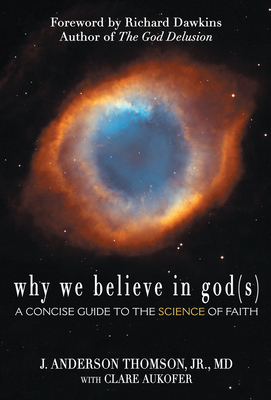 Why We Believe in God(s): A Concise Guide to the Science of Faith (Paperback)


Not On Our Shelves—Ships in 1-5 Days
(This book cannot be returned.)
In this groundbreaking volume, J. Anderson Thomson, Jr., MD, with Clare Aukofer, offers a succinct yet comprehensive study of how and why the human mind generates religious belief. Dr. Thomson, a highly respected practicing psychiatrist with credentials in forensic psychiatry and evolutionary psychology, methodically investigates the components and causes of religious belief in the same way any scientist would investigate the movement of astronomical bodies or the evolution of life over time—that is, as a purely natural phenomenon. Providing compelling evidence from psychology, the cognitive neurosciences, and related fields, he, with Ms. Aukofer, presents an easily accessible and exceptionally convincing case that god(s) were created by man—not vice versa. With this slim volume, Dr. Thomson establishes himself as a must-read thinker and leading voice on the primacy of reason and science over superstition and religion.
J. Anderson Thomson Jr., MD, is a staff psychiatrist at the University of Virginia's Student Health Center and Institute of Law, Psychiatry, and Public Policy. He maintains a private practice of adult and forensic psychiatry and serves as a trustee of the Richard Dawkins Foundation for Reason and Science. Clare Aukofer is a medical writer and editor. She lives in Charlottesville, Virginia. Richard Dawkins is an ethologist, an evolutionary biologist, and a writer. He is an emeritus fellow of New College, Oxford, and was formerly University of Oxford’s Professor for Public Understanding of Science. Among his previous books are The Ancestor’s Tale, The God Delusion, and The Selfish Gene.
"Ray Dallo, billionaire philanthropist and chairman of the world's largest hedgefund, includes Why We Believe in God(s) in his list of 15 books that everyone from investors to college students should read to understand today's world." — Business Insider