Drunk with Blood: God's Killings in the Bible (Paperback) 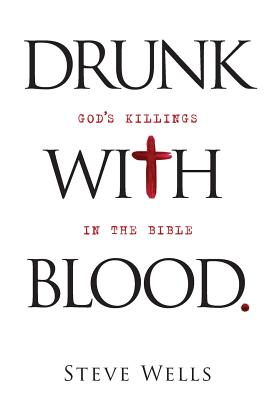 Drunk with Blood: God's Killings in the Bible (Paperback)

Completely Revised Second Edition with 23 new killings from the Apocrypha.

Drunk With Blood includes a separate account for each of God's 158 killings. These stories fill the pages of the Bible, yet they are seldom read in church and are ignored by most Bible believers, which is a shame because God is so proud of his killings:

You've probably hear of a few of God's killings. Noah's Flood, Sodom and Gomorrah, David and Goliath, maybe. But there are over 150 others that are unknown to pretty much everyone, believer and nonbeliever alike.

Did you know, for example, that God:

*Forced friends and family to kill each other for dancing naked around Aaron's golden calf?

*Burned Aaron's sons to death for offering him strange fire?

*Buried alive those that opposed Moses (along with their families)?

*Rewarded Phinehas for throwing a spear though the bellies of an inter-tribal couple while they were having sex?

*Ordered, assisted in, or approved of dozens of complete genocides?

*Accepted human sacrifice in the cases of Jephthah's daughter and Saul's seven sons?

*Helped Samson murder thirty men for their clothes, slaughter 1000 with the jawbone of an ass, and kill 3000 civilians in a a suicide terrorist attack?

*Smote the Philistines of several cities with hemorrhoids in their secret parts?

*Killed a man for trying to keep the ark of the covenant from falling and 50,070 for looking into the ark?

*Approved when David bought his first wife with 200 Philistine foreskins?

*Killed King Saul for not killing every Amalekite as he told him to do?

*Sent a lion to kill a prophet for believing another prophet's lie, another lion to kill a man for not smiting a prophet, and some more lions to kill people that didn't fear him enough?

*Killed 450 religious leaders who lost a prayer contest with Elijah and burned 102 men to death for asking Elijah to come down from his hill?

*Killed 27,000 Syrians by having a wall fall on them, sent an angel to kill 185,000 sleeping soldiers, interfered in human battles to kill a half million Israelite and a million Ethiopian soldiers?

*Killed King Ahab for not killing a captured king, and then sent King Jehu on a series of mass murders to kill all of Ahab's family and friends who had ever "pissed against a wall?"

*Killed Jehoram by making his bowels fall out?

*Killed Job's ten children in a bet with Satan?

*Killed Ezekiel's wife and told him not to mourn her?

*Killed Ananias and Sapphira for not giving Peter all their money?

*Killed King Herod by feeding him to worms?

All of these killings, and more, are found in the Bible, and their stories are told in the 2nd Edition of Drunk With Blood.

Steve Wells is the author of the Skeptic's Annotated Bible and Drunk with Blood: God's killings in the Bible. He also created and maintains the website www.skepticsannotatedbible.com and www.dwindlinginunbelief.blogspot.com. When he's not critiquing the "holy books", he can usually be found with a field guide identifying insects/plants/birds, sailing, or auditing classes at the local university.