Digital Medieval: The First Twenty Years of Music on the Web ...and the Next Twenty (Paperback) 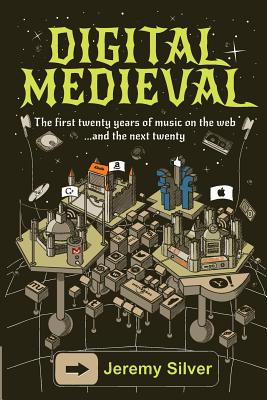 Digital Medieval: The First Twenty Years of Music on the Web ...and the Next Twenty (Paperback)


Not On Our Shelves—Ships in 1-5 Days
(This book cannot be returned.)
Pirates, Digital City States, micro-serfs, the Maker movement - the landscape of the internet is increasingly medieval. Digital Medieval is a brilliantly written, insider account of how the music industry acted as the canary in the gold-mine of the internet. The author, a music industry executive, entrepreneur and policy-maker takes us on a riveting journey through the twists and turns of how the music industry lost half its value in ten years and tried to sue 30,000 US citiizens before beginning a slow journey of reconciliation and adaptation. The book describes the evolution of the twin technologies of the worldwide web and the MP3 both of which appeared in public for the first time in 1993, and combined to undermine most of the traditional value in recorded music. Silver documents through personal anecdote, insider information and historical narrative, the unfolding story and the twists and turns of the labels as the internet disrupted their business model. Silver looks closely at the issues surrounding piracy and the file-sharing debate about the future of copyright. From the trauma of music he draws a much broader fascinating thesis about the big ideas that emerge from this rapid period of change. Silver explains how his theory of Digital Medieval matches the emerging landscape dominated by companies like Facebook, Google, Amazon and Apple. He describes a scenario which sees us plunge into a digital medieval era of darkness. A period of moral forgetting and wide scale data exploitation. This experienced and insightful author sets out the key dilemma facing Western capitalist cultures today between descending deeper into a data driven, privacy-invaded dark ages or choosing an ascent into a period of enlightenment and inventiveness that might become the digital renaissance - to which so many entrepreneurs and cultural activists have aspired. In a uniquely drawn portrait of the next twenty years of music's digital destiny, Silver poses some fundamental questions about how national regulation, corporate responsibility and consumer choices will determine the shape of the next two decades of the internet. " I enjoyed this very much - very readable and informative and would be very useful for teaching purposes" Professor Simon Frith - University of Edinburgh. "Fantastic I finished it last night. What a great read. I'm blown away by how much detail is here." Toni Schneider, CEO Automattic.
Jeremy Silver is an entrepreneur and advisor in digital media. He is executive chairman of Semetric, an entertainment data company, and chairman of MusicGlue a direct-to-consumer company. He is an advisor to the UK Government - Technology Strategy Board and to the Bridgeman Art Library. He was CEO of Sibelius Software, a music notation software company. He was worldwide Vice President of New Media for EMI Music Group in London and then in Los Angeles. He has been a contributor to conferences run by the Economist, TEDx, Midem, and the LSE among others.