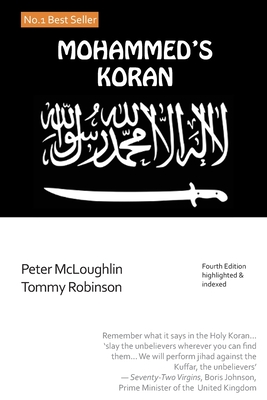 This book contains the 20th century's most common translation of the Koran, re-arranged into the chronological order accepted by Western scholars and devout Muslims alike. The book also shows how later verses (particularly The Verse of the Sword) abrogate (cancel) all the "peaceful" verses of the Koran. The principle of abrogation has been accepted by Islamic scholars for over 1000 years. When seen from the perspective of abrogation Islam is anything but "a religion of Peace". This is the only Koran in history which denounces the scores of commands to violence contained within the Koran. Yet from the first day of publication the elite have attempted to censor this book, to prevent you from seeing the evidence with your own eyes

The 100 page Introduction shows the public have been deceived by the Grand Lie: "Islam is a religion of peace". Before that day in September 2001 when devout Muslims killed 3,000 innocent Americans, no-one described Islam as "a religion of Peace". Before that fateful date no experts recognized any distinction between "Islam" and "Islamism". All these concepts exist to deceive you, so you cannot understand why Muslims kill for Islam. But throughout history Western experts have known that Islam is a religion of war.

We show how the most authoritative Islamic texts say that Mohammed was killed as a result of leading his army on one of his genocidal raids on the Jews of Arabia. The tolerant multiculturalism of Arabia permitted Mohammed to create a "new religion", a doctrine which opposed multiculturalism and which justified the most brutal violence against non-Muslims. Moreover, the mainstream translations of the Koran throughout the 20th century preface the translation with explanations that the Koran only came to be transcribed because Mohammed's apostles were also dying in battles to impose Islam upon non-Muslims This stark evidence by these apologists for Islam shows it was accepted throughout the 20th century that Islam was imposed by the sword and that Jihad is the foundation of Islam.

This book contains the clearest explanation and the strongest proof of the true meaning of the Koran. Politicians, clergy, journalists and academics are able to provide you with no logical explanation for more than 30,000 terrorist attacks by "the religion of Peace" since 2001. After reading this book you will be left in no doubt that the West is never going to stop the growth in Islamic terrorism until the fundamentals of Islam are exposed and criticised by the public. As you will see from this book, Mohammed and his "rightly guided Caliphs" (devout followers) were more like ISIS than they were like Jesus or Buddha.

When Mohammed's Koran was first published it immediately became a No.1 best-seller, a first for a self-published book in the 21st century. Extraordinary measures of censorship were deployed to prevent others from reading this book. The launch events were forcibly closed down by police (who threatened the venues with bankruptcy should they permit the book to be launched there). Internet giants were persuaded by the British state to silence the authors.

Why would there be such extraordinary efforts to censor Mohammed's Koran, a book which denounces violence and hatred? Would they go to these lengths if the book failed to prove its argument? They cannot refute the evidence contained in the book so instead they censor the book. We fully expect that in the coming years the British state will pass legislation to make this book illegal.

This new edition contains an additional Appendix, documenting how this book was censored by global corporations. The extensive Index to the Koran enables the reader to see for themselves the all-pervasive hostility which Islam has for non-Muslims.