Servants on the Slopes: Stories of Faith, Failure, and the Miracle of Changed Lives (Paperback) 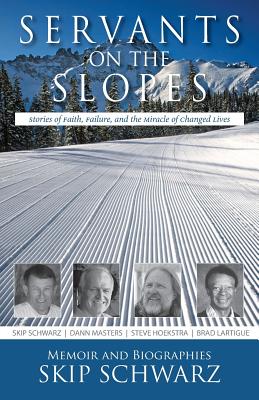 Servants on the Slopes: Stories of Faith, Failure, and the Miracle of Changed Lives (Paperback)

In his own memoir and the biographies of three colleagues, Skip Schwarz tells the stories of four men who share a unique and challenging calling: starting ministries at ski resorts. Their journeys to this uncommon occupation were anything but predictable, and had not God intervened, their lives would have turned out tragically different. Divorce, drug addiction, mental illness, and job losses were the obstacles God redeemed, rewarding their faithfulness amidst these trials by leading each into a ministry to the thousands of skiers and their families who enjoy skiing, snowboarding, and the beauty of the natural world around them. Theirs was a calling that none sought, but all found; their individual paths illustrating a principle applicable to everyone regardless of their station in life: no matter what happens, for those who remain faithful, God has a plan.

SKIP SCHWARZ-- Skip was living his dream. Pastoring a vibrant and growing church, married to a wonderful wife and with two beautiful children, he was experiencing the close family life he had yearned for since childhood. Then, without warning, everything exploded. Two years later, he was single and pastoring three small churches in Western Maine. In another two years, however, two of those churches became full-time ministries and Skip, who wasn't even a skier, followed God's leading into the most unlikely of ministries: ski resorts. For the next thirty years, he shared the good news of Jesus Christ and served those in ski areas, seeing lives change, including his own.

DANN MASTERS-- Growing up in a poor home in rural Oklahoma, Dann was part of a family of five that dealt with both alcoholism and the tragic death of a parent. Intent on a career as a professional musician, Dann initially resisted God's call into the ministry. When he finally yielded and entered seminary, an unwanted divorce threatened both his graduation and his career. Two years later, having given up on the ministry, he returned home to await a job as a college counselor. Then, a pastor he met for the first time, the members of a church, and a woman he had known since childhood, gave his life a new direction. Dann went on to become the first pastor of Angel Fire Baptist Church in the resort community of Angel Fire, New Mexico, opening the doors of faith to many and sharing God's love with thousands.

STEVE HOEKSTRA--Surrounded by a large extended family, Steve's childhood in Denver, Colorado, was almost idyllic. He grew up in the church and put his faith in Christ as a nine-year-old. Five years later, his family's move to another town both ended their church involvement and launched Steve into the life of a prodigal, including the use of marijuana. At the age of twenty-four, married and working as a farmhand, he got out of bed late one night to answer the phone. His life would never be the same. After attending Bible school and leading a small but growing church, Steve and his family moved to the resort community of Vail, Colorado. Since then, he has helped start more ski ministries than anyone else in the country, and leaves behind him a trail of transformed lives.

BRAD LARTIGUE --The oldest child in a family of seven, Brad was born into the home of a professor/pastor father and a musically-gifted mother. Although raised a Christian, his faith came alive in his college years. After spending two summers on islands (and nearly losing his life on both) Brad returned to his campus with a deep thirst for adventure. Following college, he pioneered a ministry at Taos ski area in New Mexico and after seminary, at Big Sky in Montana. In 2009, a tragic accident followed by job changes left his world in disarray. From a bed of confusion and despair, Brad discerned God's leading and followed it.