Bet on Yourself: Inside the Mind of the Ultimate Underdog (Hardcover) 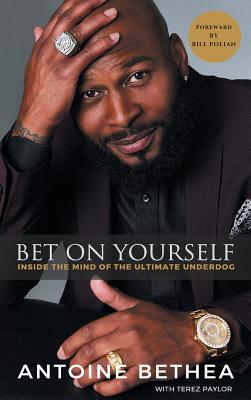 Bet on Yourself: Inside the Mind of the Ultimate Underdog (Hardcover)

By Antoine Bethea, Terez Paylor (With), Polian Bill (Foreword by)

He was too short, they said. Too light, they thought. By the time National Signing Day rolled around in February 2002, not a single Division 1 or Division 2 school offered Antoine Bethea a football scholarship.

At 5 feet 11 and 170 pounds, Bethea did not fit the mold of a college middle linebacker, the position he played as a high school senior. But while Bethea didn't have prototype size, what those colleges couldn't measure was how much he wanted to succeed.

Bethea attended Howard University -- a nearby historically black college -- and walked onto the team, determined to earn a football scholarship. Bethea's bet on himself eventually paid off, despite a series of setbacks and no shortage of doubters, as this ultimate underdog grew into a Super Bowl champion and three-time Pro Bowler thanks to seven core lessons he'll share in this book, including:

- No Excuses, No Explanations
Why the motto of Bethea's Super Bowl championship team resonates in all walks of life.

- Take Slights Personally & Never Get Complacent
The secret to developing and maintaining an unyielding mental edge.

- Stand For What You Believe In
Why personal integrity drove Bethea's decision to join the NFL anthem protests.

This is not only the inside story of how Antoine Bethea bucked the odds to become an NFL star; it's also a case study on how to fight back when people underestimate you. If Antoine Bethea -- a 5-foot-nothing middle linebacker with zero college scholarship offers -- can go on to play 13 years in the NFL, then you can also make your dreams come true, too, whatever they are, as long as you learn how to bet on yourself.