The Lesser Key of Solomon (Paperback) 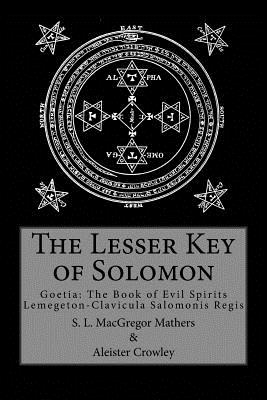 The Lesser Key of Solomon (Paperback)

This trade paperback edition is a fully illustrated reprint of the 1904 publication by Aleister Crowley and Samuel Liddell MacGregor Mathers. This edition of The Lesser Key of Solomon the King contains all of the over 150 seals, sigils, and charts of the original lesser book of Solomon. Beware of other editions that do not contain the Lesser Key of Solomon seals; they were painstakingly researched by Mathers and Crowley, and Solomon's lesser key is enhanced by their inclusion. This edition also contains Crowley's original comments located in over 35 annotations to help the reader understand the lesser keys of Solomon the king.

In this work, Crowley and Mathers assemble descriptions and directions for the invocation of over 72 demons or spirits. Included are: illustrations of Solomon's Magic Circle & Triangle, Enochian translations of the Goetia book, step by step guides for invocation, as well as definitions and explanations for the ancient terms seen throughout the Lesser Key of Solomon book.

The Lesser Key of Solomon, or the Clavicula Salomonis Regis, or Lemegeton, is a compilation of materials and writings from ancient sources making up a text book of magic or "grimoire." Portions of this book can be traced back to the mid-16th to 17th centuries, when occult researchers such as Cornelius Agrippa and Johannes Trithemisus assembled what they discovered during their investigations into their own great works.

As a modern grimoire, the Lesser Key of Solomon has seen several editions with various authors and editors taking liberty to edit and translate the ancient writings and source material. In 1898, Arthur Edward Waite published his The Book of Black Magic and of Pacts, which contained large portions of the Lemegeton. He was followed by Mathers and Crowley in 1904 who published The Goetia: The Lesser Key of Solomon. Many others have assembled their own version of this ancient material since, and it is important to realize that it is the contents rather than the book itself that make up the Lesser Key. Traditionally, the source material is divided into five books: Ars Goetia, Ars Theurgia Goetia, Ars Paulina, Ars Almadel, and Ars Notoria. Mathers and Crowley indicate their edition is a translation only of the first book: Goetia.

In the preface to this edition, it is explained that a "Secret Chief" of the Rosicrucian Order directed the completion of the book. The original editor was a G. H. Fra. D.D.C.F. who translated ancient texts from French, Hebrew, and Latin, but was unable to complete his labors because of the martial assaults of the Four Great Princes. Crowley was then asked to step in and finish what the previous author had begun. Traditionally, S. L. MacGregor Mathers is credited as the translator of this edition, and Crowley is given the title of editor. Although impossible to verify, it is often claimed that Mathers did not want to publish this work, but Crowley did so anyway without his permission.

Samuel Liddell (or Liddel) MacGregor Mathers, born Samuel Liddell Mathers, was a British occultist. He is primarily known as one of the founders of the Hermetic Order of the Golden Dawn, a ceremonial magic order of which offshoots still exist today. Mathers was born in January 1854 in Hackney, London, England. He attended Bedford School, subsequently working in Bournemouth, Dorset, as a clerk, before moving to London following the death of his mother. Mathers was a practicing vegetarian, or (according to some accounts) vegan, an outspoken anti-vivisectionist, and a non-smoker. It is known that his main interests were magic and the theory of war, his first book being a translation of a French military manual. Mathers was a polyglot; among the languages he had studied were English, French, Latin, Greek, Hebrew, Gaelic and Coptic, though he had a greater command of some languages than of others. His translations of such books as The Book of Abramelin (14thC.), Christian Knorr von Rosenroth's The Kabbalah Unveiled (1684), Key of Solomon (anonymous 14thC.), The Lesser Key of Solomon (anonymous 17thC.), and the Grimoire of Armadel (17thC.), while probably justly criticized with respect to quality, were responsible for making what had been obscure and inaccessible material widely available to the non-academic English speaking world. They have had considerable influence on the development of occult and esoteric thought since their publication, as has his consolidation of the Enochian magical system of John Dee and Edward Kelley. Mathers died in November 1918 aged 64. Aleister Crowley born Edward Alexander Crowley; 12 October 1875 - 1 December 1947, was an English occultist, ceremonial magician, poet, painter, novelist, and mountaineer. He founded the religion of Thelema, identifying himself as the prophet entrusted with guiding humanity into the Aeon of Horus in the early 20th century. A prolific writer, he published widely over the course of his life. In 1907, he and George Cecil Jones co-founded a Thelemite order, the A.A., through which they propagated the religion. After spending time in Algeria, in 1912 he was initiated into another esoteric order, the German-based Ordo Templi Orientis (O.T.O.). Through the O.T.O., Thelemite groups were established in Britain, Australia, and North America.