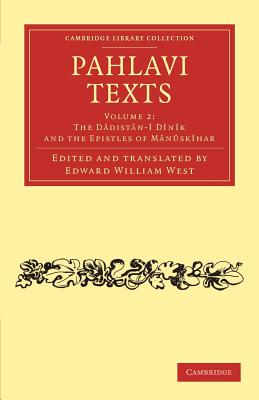 
Not On Our Shelves—Ships in 1-5 Days
(This book cannot be returned.)
Published between 1880 and 1897 as part of Max Muller's Sacred Books of the East series, this five-volume translation of Pahlavi texts was the work of Edward William West (1824 1905). Largely self-taught, West developed his knowledge of ancient oriental languages in India, where he worked as a civil engineer. After returning to Europe, West focused on the study of sacred Zoroastrian texts and prepared these translations of Pahlavi manuscripts. His writings and editions are still referenced today in Indo-Iranian studies. Volume 2 contains the ninth-century Dadistan-i Dinik and Epistles of Manuskihar. The former are religious judgments or decisions given by Manuskihar, a high priest of Iran, in answer to ninety-two queries put to him by fellow Zoroastrians. Along with the Epistles, relating to complaints made to Manuskihar about his brother Zad-sparam, these texts give the reader an insight into the Zoroastrianism of the period, its tenets, and its relationship with the developing Islamic faith.