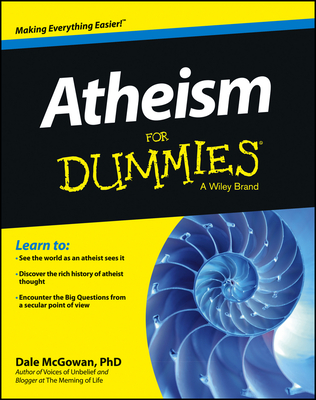 
Not On Our Shelves—Ships in 1-5 Days
(This book cannot be returned.)
The easy way to understand atheism and secular philosophy

For people seeking a non-religious philosophy of life, as well as believers with atheist friends, Atheism For Dummies offers an intelligent exploration of the historical and moral case for atheism. Often wildly misunderstood, atheism is a secular approach to life based on the understanding that reality is an arrangement of physical matter, with no consideration of unverifiable spiritual forces.

Atheism For Dummies offers a brief history of atheist philosophy and its evolution, explores it as a historical and cultural movement, covers important historical writings on the subject, and discusses the nature of ethics and morality in the absence of religion.

As the number of atheists worldwide continues to grow, this book offers a broad understanding of the subject for those exploring atheism as an approach to living.

Dale McGowan, PhD, writes the popular secular blog The Meming of Life, teaches secular parenting workshops across North America, and is executive director of Foundation Beyond Belief, a humanist charitable organization. He has been interviewed in major publications, such as Newsweek and the New York Times, and was 2008 Harvard Humanist of the Year.