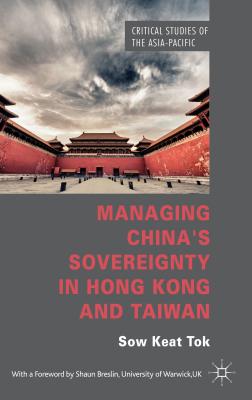 
Not On Our Shelves—Ships in 1-5 Days
Is China always defensive about its sovereignty issues? Does China see sovereignty essentially as 'absolute, ' 'Victorian, ' or 'Westphalian?' Sow Keat Tok suggests that Beijing has a more nuanced and flexible policy towards 'sovereignty' than previously assumed. By comparing China's changing policy towards Taiwan and Hong Kong, the author relates the role of previous conceptions of the world order in China's conception of modern 'sovereignty', thereby uncovers Beijing's deepest concern when dealing with its sovereignty issue.
Sow Keat Tok is lecturer at the Asia Institute, The University of Melbourne, Australia. He previously worked at the Centre for the Study of Globalisation and Regionalisation (CSGR) and the Department of Politics and International Studies (PAIS) in University of Warwick, UK, the China Policy Institute, University of Nottingham, UK, and East Asian Institute, National University of Singapore.