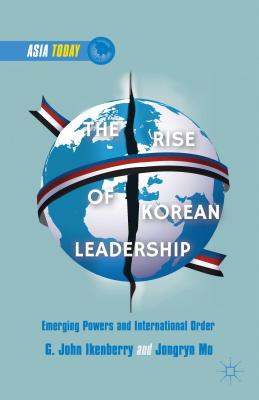 
Not On Our Shelves—Ships in 1-5 Days
South Korea has emerged as a new middle power playing a significant role in a wide range of important global issue areas and supporting liberal international order with its leadership diplomacy. The growing role played by new powers like Korea calls into question the prevailing view that global governance is polarized with emerging powers challenging the liberal international order established by the United States and its European allies after World War II. As the case of Korea shows, large developing countries like the BRICS are not the only emerging powers active in global governance. Newly developed or high income developing countries like South Korea, Turkey and Mexico are also active emerging powers, taking new initiatives, setting agendas and mediating conflicts between rival groups on the global stage. Because these high income developing countries have advanced under and benefited from the liberal international order, they see a great stake in its stability and show a willingness to protect it. Liberal internationalist developing countries are joining the expanding list of middle powers who contribute to the maintenance of liberal international order as niche players and system supporters.
Author G. John Ikenberry: G. John Ikenberry is the Albert G. Milbank Professor of Politics and International Affairs at Princeton University in the Department of Politics and the Woodrow Wilson School of Public and International Affairs. Ikenberry is also a Global Eminence Scholar at Kyung Hee University in Seoul, Korea. He is the author of After Victory: Institutions, Strategic Restraint, and the Rebuilding of Order after Major Wars (2001), which won the 2002 Schroeder-Jervis Award, and is co-author of Crisis of American Foreign Policy: Wilsonianism in the 21st Century (2009), The Alliance Constrained: The U.S.- Japan Security Alliance and Regional Multilateralism (2011), edited with Takashi Inoguchi and Yoichiro Sato, and Liberal Leviathan: The Origins, Crisis, and Transformation of the American World Order (2011). Author Mo Jongryn: Professor of International Political Economy at the Graduate School of International Studies, Yonsei University, Seoul, South Korea