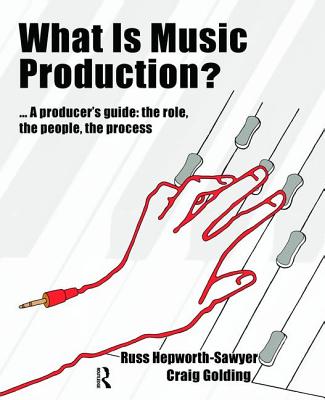 
Special Order—Subject to Availability
To complete an album, a producer needs to know what goes into capturing great music and teasing out inspirational performances from artists. As a producer, you are guiding not only the music, but also the business and the technical aspects of an album. What Is Music Production? is a guide to this guidance.Formed from a blend of solid information extracted from detailed interviews, the book focuses on the process of music production, providing insight into how the producer guides this process and molds the final product.Whether you are a student or just starting your professional career, What is Music Production? explains what you need to know-from working with artists, songs, pre-production, mixing, and mastering to the finance and budgeting-to glean a professional result. Combining the how to with online assets and interviews, this book arms you with vital insight into the business of being a music producer.
Russ Hepworth-Sawyer is a sound engineer and producer with extensive experience in all things audio. He is a member of the Association of Professional Recording Services and the Audio Engineering Society; a Fellow of the Institute For Learning (U.K.); and a board member of the Music Producer's Guild. Through MOTTOsound (www.mottosound.co.uk), Russ works freelance in the industry as a mastering engineer, a producer, writer, and consultant. Russ currently lectures part-time for York St John University and Barnsley College Online and has taught extensively in higher education at British institutions including Leeds College of Music, London College of Music, and Rose Bruford College. He currently writes for Pro Sound News Europe, has contributed to Sound On Sound magazine, and has written many titles for Focal Press.Craig Golding is currently Course Leader for the BA (Hons) Music Production degree program at Leeds College of Music in the U.K. Craig lectures in production, sound recording techniques, studio production, and song production and leads a team that is responsible for the delivery and development of one of the most popular music production courses in the U.K. Craig also has an active freelance career in sound engineering and production with over a decade's experience working in the industry. Under the banner of CMG Sound Craig has worked as an FOH engineer at many large venues in the U.K. including The Sage Gateshead; The Bridgewater Hall, Manchester; and Queen Elizabeth Hall, London. Craig continues to work with a variety of artists and ensembles both in live and studio contexts.