Forces of Production: A Social History of Industrial Automation (Hardcover) 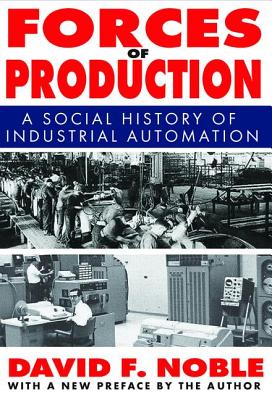 Forces of Production: A Social History of Industrial Automation (Hardcover)

Focusing on the design and implementation of computer-based automatic machine tools, David F. Noble challenges the idea that technology has a life of its own. Technology has been both a convenient scapegoat and a universal solution, serving to disarm critics, divert attention, depoliticize debate, and dismiss discussion of the fundamental antagonisms and inequalities that continue to beset America. This provocative study of the postwar automation of the American metal-working industry the heart of a modern industrial economy explains how dominant institutions like the great corporations, the universities, and the military, along with the ideology of modern engineering shape, the development of technology.

Noble shows how the system of "numerical control," perfected at the Massachusetts Institute of Technology (MIT) and put into general industrial use, was chosen over competing systems for reasons other than the technical and economic superiority typically advanced by its promoters. Numerical control took shape at an MIT laboratory rather than in a manufacturing setting, and a market for the new technology was created, not by cost-minded producers, but instead by the U. S. Air Force. Competing methods, equally promising, were rejected because they left control of production in the hands of skilled workers, rather than in those of management or programmers.

Noble demonstrates that engineering design is influenced by political, economic, managerial, and sociological considerations, while the deployment of equipment illustrated by a detailed case history of a large General Electric plant in Massachusetts can become entangled with such matters as labor classification, shop organization, managerial responsibility, and patterns of authority. In its examination of technology as a human, social process, Forces of Production is a path-breaking contribution to the understanding of this phenomenon in American society.