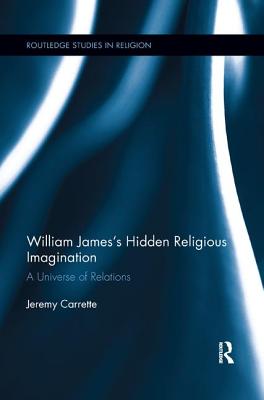 This book offers a radical new reading of William James's work on the idea of 'religion.' Moving beyond previous psychological and philosophical interpretations, it uncovers a dynamic, imaginative, and critical use of the category of religion. This work argues that we can only fully understand James's work on religion by returning to the ground of his metaphysics of relations and by incorporating literary and historical themes.

Author Jeremy Carette develops original perspectives on the influence of James's father and Calvinism, on the place of the body and sex in James, on the significance of George Eliot's novels, and Herbert Spencer's 'unknown, ' revealing a social and political discourse of civil religion and republicanism and a poetic imagination at the heart of James understanding of religion. These diverse themes are brought together through a post-structural sensitivity and a recovery of the importance of the French philosopher Charles Renouvier to James's work. This study pushes new boundaries in Jamesian scholarship by reading James with pluralism and from the French tradition. It will be a benchmark text in the reshaping of James and the nineteenth-century foundations of the modern study of 'religion.'