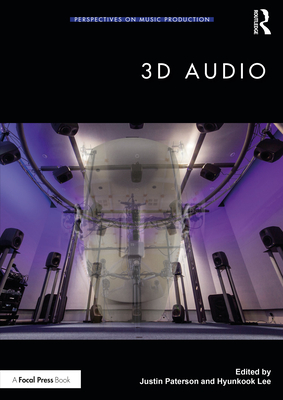 3D Audio offers a detailed perspective of this rapidly developing arena. Written by many of the world's leading researchers and practitioners, it draws from science, technologies, and creative practice to provide insight into cutting-edge research in 3D audio.

Through exploring the intersection of these fields, the reader will gain insight into a number of research areas and professional practice in 3D sonic space. As such, the book acts both as a primer that enables readers to gain an understanding of various aspects of 3D audio, and can inform students and audio enthusiasts, but its deep treatment of a diverse range of topics will also inform professional practitioners and academics beyond their core specialisms. The chapters cover areas such as an Ambisonics, binaural technologies and approaches, psychoacoustics, 3D audio recording, composition for 3D space, 3D audio in live sound, broadcast, and movies - and more.

Overall, this book offers a definitive insight into an emerging sound world that is increasingly becoming part of our everyday lives.

Justin Paterson is Professor of Music Production at London College of Music in the University of West London, where he leads the MA Advanced Music Technology course. He has numerous research publications ranging through journal articles, conference presentations, and book chapters, and is the author of the Drum Programming Handbook. Justin is Co- chair of the Innovation in Music conference series and co- editor of its books. He is also an active music producer. His current research interests are 3D audio, interactive music, and haptic feedback. Together with Professor Rob Toulson and working with Warner Music Group to release prominent artists from their roster, he developed the variPlay interactive- music format, funded by the UK Arts and Humanities Research Council. His current research - funded by Innovate UK through its Audience of the Future programme with consortium partners including Generic Robotics and the Science Museum Group - is around the development of a novel music- production interface in mixed reality that utilizes haptic feedback.Hyunkook Lee is Reader (i.e. Associate Professor) in Music Technology and Director of the Applied Psychoacoustics Laboratory (APL) at the University of Huddersfield, UK. His recent research has advanced understanding about the psychoacoustics of vertical stereophonic localization and spatial impression in 3D sound recording and reproduction. This has provided theoretical bases for the development of several 3D microphone arrays, including Schoeps ORTF- 3D. His current research topics include the six- degrees- of- freedom perception and rendering of virtual acoustics, and the creation and evaluation of a multimodal immersive experience for extended reality applications. From 2006 to 2010, he was a Senior Research Engineer in audio R&D with LG Electronics, South Korea, where he participated in the standardizations of MPEG audio codecs and developed spatial audio algorithms for mobile devices. He received a bachelor's degree in music and sound recording (Tonmeister) from the University of Surrey, Guildford, UK, in 2002 and a PhD in spatial audio psychoacoustics from the Institute of Sound Recording (IoSR) at the University of Surrey in 2006. He is a Fellow of the Audio Engineering Society (AES) and Vice Chair of the AES High Resolution Audio Technical Committee.