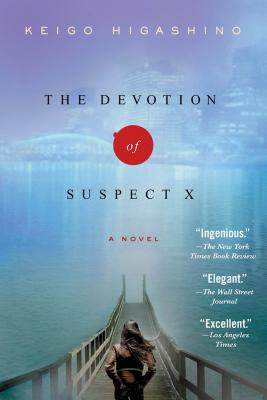 This is book number 1 in the Detective Galileo Series series.

Yasuko Hanaoka is a divorced, single mother who thought she had finally escaped her abusive ex-husband Togashi. When he shows up one day to extort money from her, threatening both her and her teenaged daughter Misato, the situation quickly escalates into violence and Togashi ends up dead on her apartment floor. Overhearing the commotion, Yasuko's next door neighbor, middle-aged high school mathematics teacher Ishigami, offers his help, disposing not only of the body but plotting the cover-up step-by-step.
When the body turns up and is identified, Detective Kusanagi draws the case and Yasuko comes under suspicion. Kusanagi is unable to find any obvious holes in Yasuko's manufactured alibi and yet is still sure that there's something wrong. Kusanagi brings in Dr. Manabu Yukawa, a physicist and college friend who frequently consults with the police. Yukawa, known to the police by the nickname Professor Galileo, went to college with Ishigami. After meeting up with him again, Yukawa is convinced that Ishigami had something to do with the murder. What ensues is a high level battle of wits, as Ishigami tries to protect Yasuko by outmaneuvering and outthinking Yukawa, who faces his most clever and determined opponent yet.

“…The best mystery novel I read [last year] was a standalone translation of a Japanese novel, The Devotion of Suspect X… a puzzle mystery that manages never to become a "cozy…" Ishigami, a mathematical genius who, through the vicissitudes of academic life has become a mere high school teacher, has fallen in love with the divorced mother-of-one who lives next door, and when she commits a killing in self-defense, he takes over the crime scene and arranges a brilliant deception that completely fools the police… [The Devotion of Suspect X] is smart at every level. Each revelation is smarter than the illusion it tears aside. And the conclusion, which depends on understanding of human character rather than logic or science, is both satisfying and frustrating. Satisfying, because it is utterly just and true to character; frustrating, because quite against our own moral sense we find ourselves rooting for the bad guy – because we understand him so well he doesn't seem all that bad.” —Orson Scott Card

“Higashino won Japan's Naoki Prize for Best Novel with this stunning thriller about miscarried human devotion, a bestseller in Japan. The author successfully combines unquestionable reasoning with unquenchable pain. In this brutally laconic translation, cold logic battles warm hearts throughout this elegant proof of the wages of sin, in which everyone suffers and no one can ever win.” —Publishers Weekly (starred review)

“Winner of Japan's prestigious Naoki Prize and a bestseller there with more than two million copies sold, this literary psychological thriller is a subtle and shifting murder mystery. It will make readers redefine devotion and trust in an otherwise complete stranger.” —Library Journal (starred review)

“Veteran police detective matches wits with a brilliant rookie criminal. This character-driven mystery by the prolific Higashino has much to recommend, including a droll Columbo-like sleuth and a great surprise ending.” —Kirkus Reviews (starred review)

“In The Devotion of Suspect X, Keigo Higashino weaves a web of intellectual gamesmanship in which the truth is a weapon that leads both police and readers astray. The ingenius conclusion is so unexpected that it's difficult to imagine anyone seeing it coming. Smart, smart characters.” —Jaqueline Winspear

“How could we have ever imagined, without the help of a novel like this, that Japanese life could be so fraught with suffering and so entertaining all at once?” —Alan Cheuse, Dallas Morning News on HIMITSU (The Secret), published as NAOKO in the U.S.

“Higashino is a deft conjurer of human relationships, and while this is first and foremost a tale of grief-- --he infuses it with spasms of sharp humor.” —East Bay Express on Himitsu (The Secret)

“The Devotion of Suspect X has all the brilliant intricacy of the best Golden Age mysteries - puzzle within puzzle, twist after twist - with a modern sensibility. It is a wonderful, fresh take on the classic mystery's intellectual struggle between protagonist and antagonist, adds to it all the right amounts of tension and pacing, places it in a fascinating setting, and gives of all of this plenty of heart.” —Jan Burke, New York Times bestselling and Edgar Award winning author of Kidnapped and Bones

“Japanese crime writers excel at many things: one is the slow tightening of the noose that's at the fast-pounding heart of the police procedural. The Devotion of Suspect X is a terrific book in that tradition and it's about time American readers got a crack at it.” —SJ Rozan, Edgar Award winning author of Winter and Night and On the Line

“The Devotion of Suspect X is elegant and spare and gripping and vivid. Most of all, however, it is deeply moving, and this is what sets it apart!” —Jesse Kellerman, bestselling author of Trouble and The Executor

“Irresistible! A mind-twisting story that will have readers plunging in to try to solve the crime before the math genius, the physics professor, or the cop get there first.” —Nancy Pickard, New York Times bestselling author of The Scent of Rain and Lightning and The Virgin of Small Plains