When I Was a Child I Read Books: Essays (Paperback) 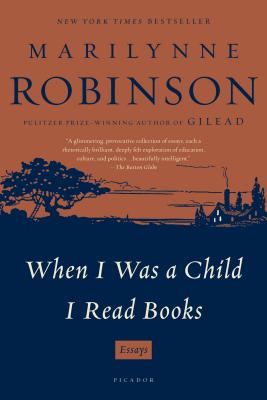 When I Was a Child I Read Books: Essays (Paperback)

Marilynne Robinson has built a sterling reputation as a writer of sharp, subtly moving prose, not only as a major American novelist, but also as a rigorous thinker and incisive essayist.

In When I Was a Child I Read Books she returns to and expands upon the themes which have preoccupied her work with renewed vigor.

In "Austerity as Ideology," she tackles the global debt crisis, and the charged political and social political climate in this country that makes finding a solution to our financial troubles so challenging. In "Open Thy Hand Wide" she searches out the deeply embedded role of generosity in Christian faith. And in "When I Was a Child," one of her most personal essays to date, an account of her childhood in Idaho becomes an exploration of individualism and the myth of the American West. Clear-eyed and forceful as ever, Robinson demonstrates once again why she is regarded as one of our essential writers.

Marilynne Robinson is the recipient of a 2012 National Humanities Medal, awarded by President Barack Obama, for "her grace and intelligence in writing." She is the author of Gilead, winner of the 2005 Pulitzer Prize for Fiction and the National Book Critics Circle Award; Home, winner of the Orange Prize and the Los Angeles Times Book Prize; and Lila, winner of the National Book Critics Circle Award. Her first novel, Housekeeping, won the Hemingway Foundation/PEN Award. Robinson's nonfiction books include The Givenness of Things, When I Was a Child I Read Books, Absence of Mind, The Death of Adam, and Mother Country. She lives in Iowa City, Iowa.

“A glimmering, provocative collection of essays, each a rhetorically brilliant, deeply felt exploration of education, culture, and politics...beautifully intelligent.” —The Boston Globe

“Robinson is that rare essayist whose sentences make you sit up and pay attention....The greatest pleasures of this book are its provocations, which are inseparable from its prose....Her essays are psalms to an indivisible America.” —The Wall Street Journal

“Illuminating...The best companion of all to Robinson's novels might be her own essays.” —The New York Times Book Review

“Elegant essays...Reading [them] is like taking a draught of water from a cold spring. They offer us something rewarding, deeply essential, and long-sought.” —Roxana Robinson, The Washington Post

“A broadside defense of literature and classic liberalism...Her defense of our national character and the systems it created can swell your heart.” —Los Angeles Times

“One of the most remarkable of modern writers...This is a rare writer about America and one it seems to me we need.” —The Buffalo News

“The indomitable Marilynne Robinson radiates genius in her collection of essays.” —Vanity Fair