Crossing Over: A Mexican Family on the Migrant Trail (Paperback) 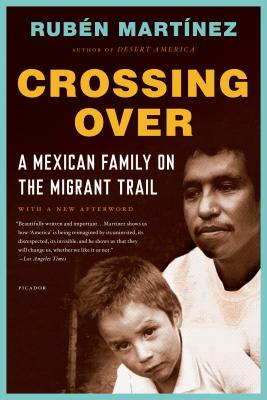 Crossing Over: A Mexican Family on the Migrant Trail (Paperback)

"Beautifully written and important...Martinez shows us how 'America' is being reimagined by its uninvited, its disrespected, its invisible, and he shows us that they will change us, whether we like it or not."—Los Angeles Times


In the decade since Crossing Over first appeared, immigration from Mexico has only become more fraught and more lethal, the rallying cry of nativist politics and a pawn in the war on terror. Yet the U.S.-Mexican border remains one of the most permeable boundaries in the world, breached daily by Mexicans in search of work. Thousands die crossing the line, and those who reach "the other side" are branded illegals, undocumented and unprotected.

Following the emigration of the Chávez clan, an extended Mexican family who lost three sons in a tragic border accident, Rubén Martínez traces the migrants' progress from their small southern Mexican town of Cherán to California, Wisconsin, and Missouri. Far from joining the melting pot, Martínez argues, the seven million migrants who are now here are creating a new Hispanic-influenced culture that is dramatically altering both Mexico and the United States.

Hailed as "valuable," "passionate," and "terrific," Crossing Over puts a human face on the phenomenon of Mexican immigration and the vibrant Latino culture it introduces to the U.S., and remains a beautifully written classic of our time.

Rubén Martínez, an Emmy-winning journalist and poet, is the author of Crossing Over and The New Americans. He lives in Los Angeles, where he holds the Fletcher Jones Chair in Literature and Writing at Loyola Marymount University.

“Beautifully written and important...Martínez shows us how 'America' is being reimagined by its uninvited, its disrespected, its invisible, and he shows us that they will change us, whether we like it or not.” —Los Angeles Times

“To read Crossing Over is to read the story of America, to understand the dynamic that renews the strength of the American Dream....Martínez has depicted a deep, enduring commonality that may change the way we understand immigration” —Chicago Tribune

“Martínez's portrait is a rich counterpoint to the simple patterns a demographer might draw.” —The New York Times Book Review

“This Los Angeles-born-and-bred grandson of Mexican immigrants brings to his subject personal passion and a knowing eye for the nuances of style and feeling, which make this a very valuable book.” —Newsday