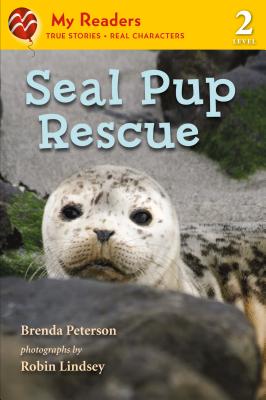 Baby seals can swim soon after they are born, but they also need to rest on shore. How can they stay safe if the beach is full of dogs and people? This adaptation of the picture book Leopard & Silkie is just right for new readers who love animals.

Brenda Peterson is the author of over sixteen books, including the National Geographic book Sightings: The Gray Whale’s Mysterious Journey and Duck and Cover, a New York Times “Notable Book of the Year.” Her memoir I Want To Be Left Behind: Finding Rapture Here on Earth was chosen as an Indie Next “Best Top Read” and named among the “Top Ten Best Non-Fiction Books of 2010” by The Christian Science Monitor. Peterson lives on the Salish Sea in Seattle, Washington, and is a co-founder of Seal Sitters.

ROBIN LINDSEY has been a commercial photographer for over thirty years. Her photographs of harbor seals and pups have been published in Wildlife Conservation magazine and several Scholastic magazines. She also photographed the children's book Seal Pup Rescue. She lives in Seattle.

“Use this book to show a program in which children are actively involved and to encourage volunteerism.” —School Library Journal on Leopard & Silkie

“Lindsey's excellent photographs show why humans can't stay away: Leopard's large, dark eyes and expressive mug seem to be smiling right at the viewer, and his furry, floppy body just calls out for a hug.” —Horn Book Magazine on Leopard & Silkie

“Although photos of the adorable seal pups steal this nicely designed picture book, kids will likely find Miles--someone who is much like them--to be inspiring, and his efforts may spark an interest in animal rights.” —Booklist on Leopard & Silkie