Falling Through Clouds: A Story of Survival, Love, and Liability (Paperback) 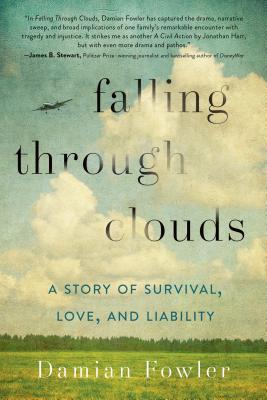 Falling Through Clouds: A Story of Survival, Love, and Liability (Paperback)

On a cloudy day in August 2003, Grace and Lily Pearson, 4 and 3, were flying in their uncle's plane along with their mother on their way to their grandpa's birthday party near Lake Superior, when Lily noticed the trees out the window were growing close; so close she could almost touch them. Before the trees tore into the cabin, Grace had the strange sensation of falling through clouds.

A story of tragedy, survival, and justice, Damian Fowler's Falling Through Clouds is about a young father's fight for his family in the wake of a plane crash that killed his wife, badly injured his two daughters, and thrust him into a David-vs-Goliath legal confrontation with a multi-billion dollar insurance company. Blindsided when he was sued in federal court by this insurance company, Toby Pearson made it his mission to change aviation insurance law in his home state and nationally, while nursing his daughters to recovery and recreating his own life. Falling Through Clouds charts the dramatic journey of a man who turned a personal tragedy into an important victory for himself, his girls, and many other Americans.

DAMIAN FOWLER, former BBC reporter and New York based journalist, has written for Vanity Fair, Vogue, The Guardian, The Financial Times Magazine, and The Times of London, among others. He is the author of Falling Through Clouds.

“In his nonfiction debut, magazine journalist Fowler pieces together the compelling story of Minnesota native Toby Pearson and his unfortunate ties to the crash of a noncommercial airplane that went down in the vast woodlands near Lake Superior. That small aircraft was carrying Pearson's wife and two daughters… Fowler does a meticulous job of getting readers acquainted with Pearson and his family and providing a solid account of their lives before and after the crash. He manages to solidify the personal angle of the Pearsons' harrowing story while also using this as an entry point into a larger investigation into both lax aviation safety standards in the private/noncommercial field and questions of who is liable for what damage according to the insurance industry. The author's maintenance of this balance between the more delicate intimacies of Toby Pearson's post-crash family life and the more reportorial and investigative side of the book works well… A sensitive portrayal of a family tragedy needlessly escalated by the insensitive bureaucracy of insurance companies.” —Kirkus

“In his first book, journalist Fowler delves deeply into the more arcane aspects of aviation insurance in a poignant review of an aircraft crash that devastated two midwestern families. Told from multiple perspectives and based on numerous interviews, the narrative opens just prior to the crash and then provides a near minute-by-minute account of the search and miraculous rescue of the two young survivors. The pilot and his sister-in-law are dead, her daughters alive. Grief among family members turns to shock as the medical expenses mount and the aircraft insurance company refuses to pay out on the policy. Lawyers and lawmakers become involved as the girls’ father fights to save his children and battles for what they deserve. Complicating Fowler’s David-versus-Goliath premise is the balancing act the facts force him to walk as he must both blame the pilot (whose errors caused the crash) and sympathize with his widow, who also lost her sister. Though the insurance company is an obvious villain, the story of the Pearson children’s recovery is truly stirring.” —Colleen Mondor, Booklist

“In FALLING THROUGH CLOUDS Damian Fowler has captured the drama, narrative sweep and broad implications of one family's remarkable encounter with tragedy and injustice. It strikes me as another A CIVIL ACTION by Jonathan Harr, but with even more drama and pathos.” —James B. Stewart, Pulitzer-Prize winning journalist and bestselling author of DisneyWar

“Falling Through Clouds is a story of unthinkable pain and loss. Yet ultimately it's the story of survival -- a harrowing testament to human love, strength and resilience.” —Patrick Smith, author of Cockpit Confidential

“This story had my heart from the first page, and it has stayed with me since. For anyone who has ever suffered through any sort of tragedy, this story reminds us that beauty often rises up from despair. It is beautifully written and gripping from start to finish.” —Sarah Smiley, author of Dinner with the Smileys and Going Overboard

“Falling Through Cloud is a gripping, emotional and wonderfully written narrative of tragedy and triumph, social justice, and the bonds of love. Most of all, it is a tale of one father's determined struggle to care for two little girls who survived an unthinkable catastrophe. If you like David v. Goliath narratives where the little guy overcomes all odds, you will devour this book.” —David Kirby, author of Death at SeaWorld, Animal Factory, and Evidence of Harm

“Falling Through Clouds balances this David vs. Goliath legal fight against the devastating emotional and physical recoveries of all parties... The judicial and statutory resolutions that Toby Pearson and his lawyer finally effect are indeed remarkable, but what trumps all the legal machinations are Grace and Lily's survival.” —Minneapolis Star Tribune

“When he first heard about the Pearson family, Fowler only had planned on writing a longer magazine-style piece. But then he talked to Toby Pearson on the phone. The hour-long conversation was so compelling that it led to Fowler visiting the Pearson family and digging even deeper into the tragedy and Toby Pearson's fight with the insurance company. He got to know the family and even played soccer with the girls one memorable fall day, he said. Early on, Fowler felt an obligation to tell the Pearson family's story and tell it right.” —Pioneer Press