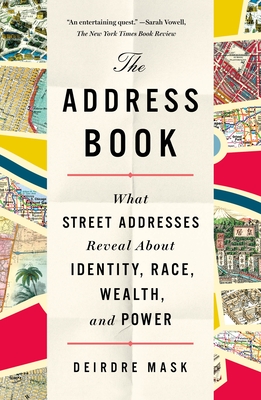 “An intriguing, in-depth look at a phenomenon that seldom penetrates the human mind or the political discourse. Filled with historical insights and rich examples, this book transports the reader into real places and events, and identifies their import for current affairs.”
— Lloyd Richardson, ShenValley Books 'n Things, Harrisonburg, VA

"An entertaining quest to trace the origins and implications of the names of the roads on which we reside." —Sarah Vowell, The New York Times Book Review

When most people think about street addresses, if they think of them at all, it is in their capacity to ensure that the postman can deliver mail or a traveler won’t get lost. But street addresses were not invented to help you find your way; they were created to find you. In many parts of the world, your address can reveal your race and class.

In this wide-ranging and remarkable book, Deirdre Mask looks at the fate of streets named after Martin Luther King Jr., the wayfinding means of ancient Romans, and how Nazis haunt the streets of modern Germany. The flipside of having an address is not having one, and we also see what that means for millions of people today, including those who live in the slums of Kolkata and on the streets of London. Filled with fascinating people and histories, The Address Book illuminates the complex and sometimes hidden stories behind street names and their power to name, to hide, to decide who counts, who doesn’t—and why.

The author of The Address Book: What Street Addresses Reveal About Identity, Race, Wealth, and Power, Deirdre's writing has appeared in The New York Times, The Atlantic, and The Guardian. Originally from North Carolina, she has taught at Harvard and the London School of Economics. She lives with her husband and daughters in London.

"An entertaining quest to trace the origins and implications of the names of the roads on which we reside....The Address Book is [Mask's] first book, and she is already a master at shoehorning in fascinating yet barely germane detours just for kicks....Mask populates her daunting inquiries with a cast of stirring meddlers whose curiosity, outrage and ambition inspire them to confront problems ignored by indifferent bureaucracies." —Sarah Vowell, The New York Times Book Review

“An impressive examination of the origins of street names around the world….It’s a damning look at the intersection of place, power and identity, tied together through Mask’s absorbing and thoughtful voice.”—Time, “100 Must-Read Books of 2020”

"Mask’s fascinating study is filled with insights into how addresses affect ordinary people around the world." —PD Smith, The Guardian (UK)

“A radical treatise on class divisions in a nation that too often insists none exist.”—Bethanne Patrick, Washington Post

"Read Deirdre Mask’s fascinating deep dive into the world of Mill Lane and Martin Luther King Street and you will begin to realise just how important these geographical markers are, how pregnant with meaning, and what a difference they make to everything from the proper functioning of society to questions of wealth, poverty and democracy...Highly entertaining."—Andrew Holgate, The Sunday Times (UK)

“An impressive book-length answer to a question few of us consider: "Why do street addresses matter?" In her first book, Mask combines deep research with skillfully written, memorable anecdotes to illuminate the vast influence of street addresses as well as the negative consequences of not having a fixed address....Throughout this eye-opening book, the author clearly demonstrates that package deliveries constitute a minuscule part of the significance of addresses—not only today, but throughout human history.—Kirkus Review (starred)

"This is a fascinating volume revealing the racism and classism behind the street names and house numbers of the places in which we live. Deirdre Mask’s impeccable research and memorable stories make for a compelling history.”—Karla Strand, Ms. Magazine

“An entertaining and wide-ranging debut....Mask’s fluid narration and impressive research uncover the importance of an aspect of daily life that most people take for granted, and she profiles a remarkable array of activists, historians, and artists whose work intersects with the evolution and meaning of street addresses. This evocative history casts its subject in a whole new light.”—Publishers Weekly (starred)

“Engaging, illuminating, and with highly relevant current subject matter, this book is recommended for all readers, especially fans of popular history and politics."—Library Journal (starred)

"From her history of the city grid to an on-the-street look at the NGO trying to give every slum in India an address, Mask leaves us with a greater appreciation of our efforts to find each other, and a peek into what the future may hold.”—Booklist

”Deirdre Mask’s book was just up my Strasse, alley, avenue and boulevard. A classic history of nomenclature - loaded, complex and absorbing.”—Simon Garfield, author of On the Map: A Mind Expanding Exploration of How the World Works

“The story of our streets is the history of our cities. Deirdre Mask reveals how the tales secreted within a street name can be as mesmerizing and mystifying as the city itself—and the people who call that place home." —Janette Sadik-Khan, Bloomberg Associates, former NYC Department of Transportation Commissioner

“The Address Book is a deeply-researched dive into the surprising histories and meanings that lie behind the seemingly mundane way we name our streets and number our houses and buildings. Deidre Mask provides powerful insight into the ways these addresses not only structure our lives but function as a tool to classify and track people, reflecting the enduring divides of class, race, and power. A must read for urbanists and all those interested in cities and modern economic and social life.” —Richard Florida, author of The Rise of the Creative Class

“Adam Gopnik observes that 'cities are their streets. Streets are not a city’s veins but its neurology, its accumulated intelligence.' In this light, street addresses map not just a city’s geography, but its very thoughts, and even its way of thinking. It is no accident that, in suburban sprawl, most people live on streets that go nowhere, or on parking lots with no proper street addresses at all. In this lively and eye-opening book, Deidre Mask unearths the many layers of meaning hiding just below the surface of the ways we place ourselves and others in our communities.” —Jeff Speck, urban planner and author of Walkable City: How Downtown Can Save America, One Step at a Time.