Start Without Me: (I'll Be There in a Minute) (Hardcover) 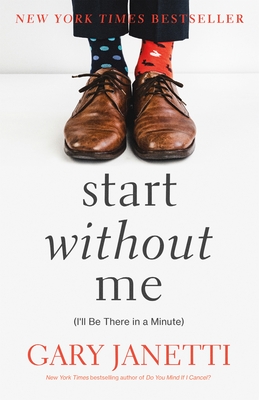 Start Without Me: (I'll Be There in a Minute) (Hardcover)

The New York Times Bestseller!
Named one of Vulture's “10 Best Comedy Books of 2022”

From New York Times bestselling author, and Family Guy writer Gary Janetti comes Start Without Me, a collection of hilarious, laugh out loud, true life stories about the small moments that add up to a big life.

Gary Janetti is bothered. By a lot of things. And thank God he’s here to tell us.

In Start Without Me, Gary returns with his acid tongue firmly in cheek to the moments and times that defined him. He takes us by the hand as we follow him through the summers he spends in his twenties, pursuing both the perfect tan and the perfect man to no avail and much regret. At his Catholic high school, he strikes up an unlikely friendship with a nun who shares Gary's love of soap operas, which becomes a salvation to them both. And don't get him started on how a bad hotel room can ruin even the best vacation. This laugh-out-loud collection of true-life stories from the man “behind his generation’s greatest comedy” (The New York Times) is for anyone who has felt the joy in holding a decade-long grudge.

Whether you are a new convert to Janetti or one of the million who follow him on social media for a daily laugh, Start Without Me will have you howling at Gary's frustrations and nodding along in agreement at the outrages of life's small slights. It's the literary equivalent of a night out with your funniest friend that you wish would never end.

Gary Janetti is the bestselling author of Do You Mind If I Cancel? and writer and producer of Family Guy, Will & Grace, Vicious, and The Prince. He lives in Los Angeles.

“[A] shockingly self-deprecatingly funny memoir...Janetti’s flaws are on display and he doesn’t care, and therein lies the comedy.”
—Vulture

“[Start Without Me] lives in the same universe, creatively and spiritually, as its predecessor, filled with first-person stories that range in tone from cunning to heartwarming and allow him to reflect on his life before he became a card-carrying member of the Hollywood establishment.”
—Hollywood Reporter

“Reading Gary Janetti’s second book was exactly what I needed to lift me out of my winter blues. It’s like sitting by your funniest friend at a cocktail party, listening to their hilarious asides about everything they’re observing. Give yourself the treat of his hilarious writing.”
—Buzzfeed

“If you think Gary Janetti's hilarious on Instagram, you should read him in print. The writer's latest collection of essays track his life from high school to the modern day, pointing out the absurd and obscene, and finding humor where it's least expected.”
—Town & Country

“Gary’s razor-sharp wit comes alive in Start Without Me. A hilarious collection of laugh out loud stories!”
—Andy Cohen

“Gary Janetti is a national treasure! Start Without Me had me screaming with laughter and seething with jealousy. But it also had me in tears. Because the sneaky secret about Gary is that as antisocial as he purports to be, no one writes with more connectedness or feeling. Sorry, Gary! Reading your book about how little you want to hang out with people is only going to make everyone want to hang out with you more.”
—Casey Wilson, New York Times bestselling author of The Wreckage of My Presence

“Gary Janetti is a master at mining his memories to give us the most absurd and hilarious stories about family, teenagers, fitting in, and growing up. Start Without Me is sharply observed, witty, and deeply relatable. It won’t surprise anyone that this book is laugh-out-loud funny but don’t let that fool you—it’s also big-hearted and surprisingly emotional.”
—Jennifer Close, bestselling author of Girls in White Dresses and The Hopefuls

“Gary Janetti is annoyingly funny. By annoying, I mean funnier than anything I could ever write. Which I guess kind of speaks to my own insecurities. Whatever. I rarely laugh out loud but with this book I did. A lot. So did my wife, who said things like, ‘Gary Janetti is so funny. I wish he were my husband.’ Am I a small, petty man jealous of Gary Janetti’s talent? Yes. Should Start Without Me be read, and re-read by everyone I know? A resounding yes!”
—John Kenney, winner of the Thurber Prize for American Humor and the New York Times bestselling author of Love Poems (for Married People)

“Writer and producer Janetti (Do You Mind If I Cancel?) briskly trots through the most memorable moments of his life in this hilarious outing. In vignettes packed with zingers, Janetti reveals how his refusal to live on any terms but his own took root early. Pithy and profane, this entertains from start to finish.”
—Publishers Weekly

Past Praise for Gary Janetti

"From “Family Guy” to his own Instagram account, Janetti has been behind some of his generation’s greatest comedy. This book of essays is no exception."
—The New York Times

"Gary Janetti's book is so rolling-on-the-floor funny, so brilliantly observant, and so full of heart, I'm sure a jealous Prince George will decree that Gary be locked up in the Tower of London."
—Kevin Kwan, New York Times bestselling author of the Crazy Rich Asians trilogy

"The writing of Gary Janetti, whether televised or tweeted, is famously incisive and sharp-tongued. What a revelation it was, therefore, to discover in these revealing personal essays an artist of great tenderness and vulnerability. And he's still funny as hell."
—Armistead Maupin, New York Times bestselling author of The Tales of the City