The Ten Equations That Rule the World: And How You Can Use Them Too (Paperback) 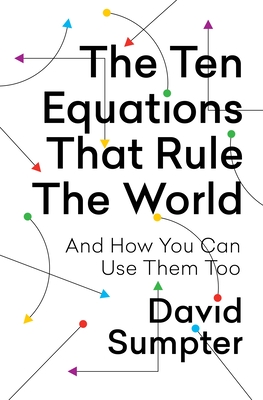 The Ten Equations That Rule the World: And How You Can Use Them Too (Paperback)

Empowering and illuminating, The Ten Equations That Rule the World shows how math really can change your life.

Is there a secret formula for getting rich? For going viral? For deciding how long to stick with your current job, Netflix series, or even relationship?

This book is all about the equations that make our world go round. Ten of them, in fact. They are integral to everything from investment banking to betting companies and social media giants. And they can help you to increase your chance of success, guard against financial loss, live more healthfully, and see through scaremongering. They are known by only the privileged few—until now.

With wit and clarity, mathematician David Sumpter shows that it isn't the technical details that make these formulas so successful. It is the way they allow mathematicians to view problems from a different angle—a way of seeing the world that anyone can learn.

David Sumpter is Professor of Applied Mathematics at the University of Uppsala, Sweden, and the author of Soccermatics and Outnumbered. His scientific research ranges from ecology and biology to political science and sociology, and he has been an international consultant in government, artificial intelligence, sports, gambling, and finance.

“Hugely entertaining, erudite . . . It's nice to be spoken to in grown-up language by a genius. You will come away from Sumpter's book with a much clearer idea of why the world is less messy than it appears.” - E&T Magazine

“Sumpter writes fascinatingly about his experiences as a consulting mathematician. . . Show[s] the relevance of mathematics to today's world.” - Times Higher Education


“Sometimes books about numbers come along and we’re so ecstatic that we just pop with delight. One such book is The Ten Equations that Rule the World.” - Tim Harford, More or Less BBC4

“These aren't the equations of Newton or Einstein crisp relations describing the evolution of a clockwork universe. These are the equations of randomness, expectation, and imperfect information. The equations, in other words, of the real world. David Sumpter provides an entertaining tour that will change how you see the world.” - Sean Carroll, author of Something Deeply Hidden