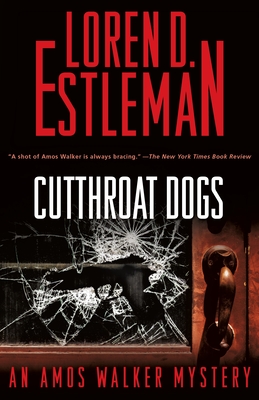 This is book number 29 in the Amos Walker Novels series.

Cut-Throat Dogs is a new Amos Walker novel from a Grand Master. “Loren D. Estleman is my hero.”—Harlan Coben

“Someone is dead who shouldn’t be, and the wrong man is in prison.”

Nearly twenty years ago, college freshman April Goss was found dead in her bathtub, an apparent suicide, but suspicion soon fell on her boyfriend. Dan Corbeil was convicted of her murder and sent to prison. Case closed.

Loren D. Estleman is the author of more than eighty novels, including the Amos Walker, Page Murdock, and Peter Macklin series. The winner of four Shamus Awards, five Spur Awards, and three Western Heritage Awards, he lives in Central Michigan with his wife, author Deborah Morgan.
" ...Something of a classic. ...Unapologetically retro. Nobody does old-school, hardboiled dick like Estleman. He's Hammett-hard, and Chandler-smart-ass, with the world weariness locked right in." —Mystery Scene Magazine